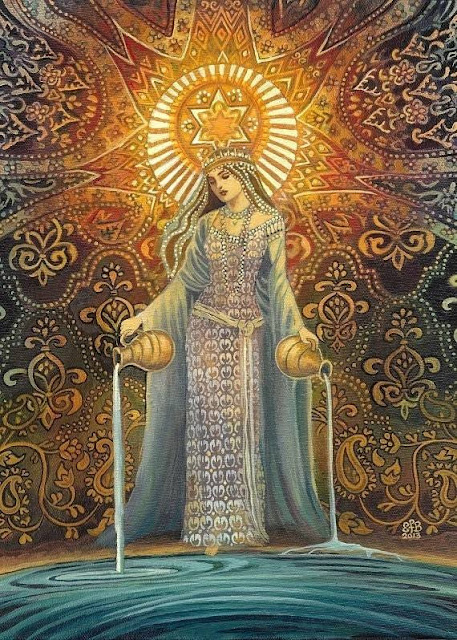 This week see’s Mercury station direct the same day the Sun perfects a conjunction to powerful Pluto (Wednesday), along with a New Moon in Aquarius on Saturday, followed by Uranus stationing direct on Sunday. Venus also perfects a conjunction to Saturn this weekend, while the Sun enters Aquarius as well. All that being said, Mars is now direct and ready to roll, but Mercury in Capricorn has to set the perimeters, rules, structures, or lay down some finishing touches to new foundations first, which can be what this week is largely about. Wednesday can mark some key turning points, meetings, or upgrades. There still may need to be patience around practicalities, but there is movement or notable progress. Next week can be when things really begin to gel, and a more productive and efficient pace can begin to be set forth in earnest. We begin the week with the Moon in sensitive Scorpio, squaring Venus, sesquisquare Jupiter, opposite Uranus, and trine Neptune. There’s an excitement here for change and progress, with high ideals, but there’s also a need to go with the flow and not push the river or try to force things. Venus square Uranus just now is eager for change, novelty, evolution, and freedom to experiment. This will have to be negotiated within a certain framework or structure. Changes instigated can be gradual and constructive so that everyone has time to adjust. The Sun conjunct Pluto is uncompromising, willful, and wrestling with complex power dynamics, power grabs, old money, established bonds/established power, the illumination of buried things, and realization of powerful goals and drives. If you’re operating in integrity, you’ve got nothing to worry about, and can make some powerful changes for the better. Things can come to the surface between now and Feb 10 (Mercury direct conjunct investigative Pluto), on into March, and beyond.

The Moon enters optimistic Sagittarius at 9:33 AM PST, to oppose Mars and trine Jupiter and Juno in Aries. There’s a spunk and optimism in the air, and possibilities can seem more expansive. There can be a tendency towards zealotry here, where people push their viewpoints, desires, politics, or dogmas vigorously on the one hand, or a simple impatience or impetuosity (hoof in mouth syndrome?) around communications. It can be easy to say too much, overshare, oversell, or get carried away. Maybe “the current thing” has people on some tangent or other. Maybe something or someone simply has our rapt enthusiasm. Regardless of how this plays out, don't let anyone work you up into a reactionary or needlessly defensive state. This small potentiality aside, it can be a productive and motivated day. The Sun conjunct Pluto is extremely driven and focused, and commands respect, while Venus getting closer to Saturn aims to reduce clutter, static, and create order from chaos. Mercury tends to be most goofy when it’s about to station, and is currently quincunx Mars, which can tend to scatter the energies, or push us to respond to things, speak, or commit to plans or assessments before we’ve really thought things through or tuned into our bodies. Less is more, (I cannot overstate this) and giving certain discussions or facts a little more time to fully set in can be wise. People can be distracted with much going on, but there can be a hopefulness and anticipation around certain endeavors that boosts morale. A certain zeal, passion, and candidness carries the day.

Mercury in 8 degrees Capricorn stations direct at 5:12 AM PST, highlighting the importance of tuning into the wisdom of the body, staying focused, and having patience to see something through. Blocks and delays can begin to be released, and things can begin to move forward with more flow and efficiency. The Sun and Pluto perfect their conjunction today at 28 degrees, which can see such intensive focus on something in fact that it can put everything else into the background for the time being. Today can see some important breakthrough points or up-leveling. There’s a sort of ruthless ambition here that can have blinders on. There can be some creative experimenting going on or something or someone enters the fold or shows up in the snail mail or the inbox that changes potentialities significantly, or helps to create more order. Something can also be revealed that can give much to be reflected upon. The evening time can see people become a bit more personable, but there’s still a certain air of aloofness, absent minded professor, or preoccupation here with something that creates a certain distance in exchanges, even if there’s things to be excited about. It’s almost as if someone feels guilty for not being more present or responsive, and comes up for air from their weird little projects, puppet collection, experiments, or obsessions to demonstrate that they’re still human. You may find yourself feeling like you have to explain yourself or excuse yourself for your focus, drive, preoccupations, or you can find yourself on the receiving end of someone explaining why they’re hanging out in a basement or lost the ability to answer calls. In either case, Mercury's forward motion can see things starting to get back on track. The evening can be pleasant, creative, and imaginative, with the Moon sextile Venus in Aquarius and square Neptune. New possibilities, acquisitions, or connections can bristle with promise.

Early morning see’s the Moon in late Sagittarius squaring Neptune, which can start the day in a head in the clouds sort of way that can be dreaming up new possibilities and excited to make progress. The Moon enters Capricorn at 11:11 AM PST, where it conjoins Mercury (now direct), squaring Jupiter and Juno, while sesquisquare Uranus. It can feel like it’s about to be all systems go in just a matter of time, and ambition around a project or endeavor can be palpable. The Moon conjunct Mercury in Capricorn can highlight business communications, or a focus on practicalities and creative changes, often on a very physical level. There can be a need to rearrange things to accommodate upgrades, new possibilities, or new ways of doing things. It’s time to turn thought into action. Mercury semisquare Saturn while quincunx Mars suggests there’s still a need for patience in some regard. It can also point to some tension due to outside pressure, or not being on the same page as others somehow. It can also simply represent the eagerness Mars has to get started already, complete a process or seal a deal. It’s important to be patient with results and to prioritize efficiently, but equally important to cut your losses, abandon lost causes, or recognize when something is simply out of your hands, so that energy can be put to more constructive use. Things need to be done differently, and there can be a reorganization underway.

The Sun enters Aquarius at 12:30 AM PST. Happy birthday Aquarius! Here, the Sun is still close to Pluto, while building a sextile to Jupiter and will eventually enliven Mars in Gemini. Now things can really begin to get interesting. The Moon in ambitious Capricorn is still conjunct Mercury and trine Uranus, which can see more communications or upgrades rolling in, technological or otherwise, that can help advance things along a smooth path. The Moon is square Chiron, which can see some sensitivity in the air. It’s a possibility that certain folks feel put off by the rather freedom oriented mathscape that can tend to create a sort of independent and aloof detachment in social or personal relationships. Under Jupiter and Juno in Aries, with Venus, Saturn, and now the Sun in Aquarius, it’s important for people to be able to hold their own in personal or social interactions, or in the very least, try to reduce dependencies or expectations for the time being, as this energy is geared towards self empowerment, and at it’s finest, mutual advancement for the good of all. As long as there is a mutual respect for autonomy and individuation, these configurations shouldn’t be a problem. However, there may be some folks who could use some subtle reassurance. It’s possible that a certain quest, goal, or desire of ones own can feel oddly alienating or even downright isolating at times, even if things are copacetic socially or interpersonally, or the path chosen, (whatever it may be) is a voluntary one.

Early Morning see’s the Moon conjunct Pluto, which can see a contained but compelling passion and intensity under the surface. There can be a focus on milestones achieved, duties performed, structures or rules abided by or established, as an intensive process has reached a new level as obstacles to progress are cleared away. The Moon enters future oriented and emotionally detached Aquarius at 10:29 AM PST, and the New Moon perfects at 12:53 PM PST at 1 degree Aquarius, where it forms a conjunction to intense Pluto, a hopeful and pioneering sextile to Jupiter and a trine to motivated Mars, along with a sextile to Juno. This New Moon is an interesting one. It can feel simultaneously liberating, empowering, and cooperative (on the surface), but it’s not without complexity. Mercury making minor tense aspects to Venus, Saturn and Mars can highlight negotiations, trades, deals, or discussions around shared power dynamics or agreed upon rules and restrictions. The “rules of engagement” can be a subtle factor surrounding certain communications. This face of Aquarius is associated with intentional exile, breaking away from the herd, to enjoy personal freedom, but also to work and think diligently towards ones own ends without interference. Some may experience this exile by force, others, by act of liberation. This decan of Aquarius is ruled by the 5 of swords, a highly complex card. There may be a feeling of defeat that accompanies the necessary accepting of terms or losses. Conversely, there is a willing exile due to certain interactions or arrangements not living up to standard, or there is a healthy self interest or sense of personal justice that becomes impossible to reconcile within the confines of current arrangements. In either case, there is a need here to break away from something and accept total isolation from that person or thing, or accept a workable compromise graciously in order to get your needs met, -all while remaining totally authentic to yourself. Either way, it can be experienced as liberation. This New Moon represents a more thorough investment of energies, nurturing and resources into a particular direction, which means the necessary phasing out of something else. It can be very freeing.

Happy Lunar New Year, year of the water rabbit. The Moon in Aquarius is trine Mars while square Uranus and sextile Chiron. There’s a lot of movement, motion, and motivation. This is a refreshing energy that can be experienced as revitalizing and reinvigorating, especially after the retrogrades. Uranus, modern ruler of Aquarius, stations direct at 2:59 PM PST today, seeing all planets direct. Things can finally begin to gain some traction now. The Moon goes on to conjoin Venus and Saturn, while still squaring Uranus. Relationships, creative endeavors, group projects, friendships, or business deals can be getting really interesting now, and there can be some unusual or unexpected alliances, attractions, offers, or meetings. There can be a positive sense that things are stabilizing while simultaneously, new possibilities are opening up. The Moon conjunct Saturn can see an element of shyness around relationships to a certain degree. There can be something odd or unusual about certain dynamics, but circumstances can also be fascinating and refreshing. The Sun sextile Jupiter is a feel good, friendly, and generous energy, and the day can have an overall feeling of contentment, aliveness, progression, and accomplishment. There can be comfortable gatherings with close friends and family, or a general focus on enjoyment, creativity, beautifying surroundings and setting a new precedent for a new life chapter.

Posted by The Curious Girl at 1:45 AM