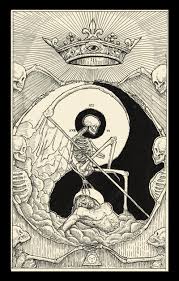 Today see’s the Moon in etheric and escapist Pisces conjunct Neptune, and trine the Sun, Juno, and Mercury Rx in intense, moody, and secretive Scorpio, while forming a sextile to unpredictable, independent Uranus in earthy Taurus. This can see some highly unusual circumstances, subtle shocks from within, changeable emotions, and intense, very unconventional situations. This is a reflective, imaginative, and sensitive energy. A lunar semi square to Saturn suggests there could be some blockages, challenges, or perhaps a certain “going without” to contend with for the time being, but the Sun, Mercury and Juno in Scorpio are resourceful. With the Moon in Pisces, communications can take place more on a spiritual plane, and things may be more muted and silent on the surface for one reason or another. This is a quiet and introspective energy and even if not much is said or exchanged there is a lot to chew on in the quiet. It’s quite a rich landscape of feelings, impressions, moods, longings, and imaginings. There can be a lot of change going on, both without and within. With the Sun opposite Uranus and conjunct Mercury, communications can be shocking, erratic, unpredictable, unexpected, or just highly unusual. Things are a bit of a freak show at the moment.

The Full Moon in Taurus culminates at exactly 7:49 am PST. It opposes the Sun in Scorpio and conjoins Uranus. Needless to say, big change is on the horizon. Full Moon’s are about completions, so take a look at the house in your chart ruled by Taurus to see where you’re wrapping something up and making a major push forward. There’s a lot of wild cards involved here, and the do or die compulsive energy of Scorpio, along with Mercury’s backtrack into Libra, and Venus’ entry into this indecisive, but diplomatic sign can be up against some major decisions, as well as some inevitable transformations-the consequences of which are yet to be determined. There is excitement and risk involved in all this, and the interpersonal element can be unpredictable, unorthodox, shocking, surprising, experimental, or chaotic. So it’s best to take things in stride. Mercury’s backtrack coincides with simultaneous leaps forward that change things significantly, which can have a bit of a tailspin effect as a massive tsunami of change makes it’s way in, whether we are entirely ready for it or not. With Mercury Rx now in Libra squaring Jupiter and Saturn it’s possible to feel we’ve bitten off a little more than we can chew, and there may be somewhat of a review attempting to happen in the middle of massive change, particularly interpersonally, and as regards partnerships and collaborations. With the Moon in earthy Taurus conjunct Uranus, going on to trine Jupiter and Pluto and sextile Neptune in the evening it could be a good time for a good time, and there could be a pleasant electricity in the air that’s excellent for creativity. Something can really satisfy the senses, instincts or feelings, or there can be a lot of inspiration that may seem to come out of nowhere. This can be a bit of a wild ride. There’s a lot to prepare for and a lot of impressions to take in that can be having a delayed reaction that’s mostly going on under the surface. This is quite a download. Mercury Rx in Libra will just have to “take it all into consideration”, while the rest of these configurations instigate massive upheaval and changes. This math looks like it’s trying to pull a tablecloth off of a dining table without upsetting the table arrangement or breaking the fine china. Either way, all things considered, the vibes this weekend are bueno, although there’s a low key, mysterious intensity to it all, and a lot of impressions to interpret, things to take in, or surprising things to reflect upon that make quite an impact.

This morning begins with the Moon in late Gemini, linking with Mercury, now direct, in harmony seeking Libra. In the wee hours, a minor aspect to Uranus also plays a role. This can highlight some out of the blue communications, surprising news, or thoughts that shake up our paradigms a bit. The mind and tongue can be busy with banter, back and forth, and multitasking. With a planetary emphasis on dual air signs this morning, our attentions can also be split, and there can be more than one thing, person, or conversation to consider, amidst massive transformation and change that already has it’s own momentum of inescapable inevitability (Sun in Scorpio opposite Uranus in Taurus). The afternoon see’s the Moon enter comfort and security seeking Cancer. With Mercury going forward now certain things may begin to come into focus that were shelved or perhaps not previously considered. The Moon in Cancer squares both Venus in Libra and Chiron in Aries. These configurations can speak vey much to feeling out on a limb, indecisive, and unable to back track, which can come with a bit of a vulnerable feeling, but also, as a lunar sextile to Uranus in Taurus indicates, a desire to wrest free from feeling backed into any corners or bound to any circumstances, decisions, or binding commitments. Definitely some interesting configurations to see the day after election day. There’s also a nervous excitement to these configurations that can be experienced as somewhat unsettling to some, or in the very least, vulnerable to the tides of change, which are nothing short of massive. Tomorrow can highlight this vulnerability considerably, as a lot of action can transpire all at once, and it looks set to be an action oriented day in which we will seek pockets of peace and reflection in the midst of all the action and push towards massive change. To some degree we may feel out of our depth or comfort zone amidst these larger than life shifts. In other ways, oddly at peace with it all, or in the very least, seeking to be at peace with surrendering to a plunge into so many unknowns.  The next couple of days under the Cancer lunation will mark a period of massive shifts that will take time to fully absorb the impact of.

Posted by The Curious Girl at 3:50 AM