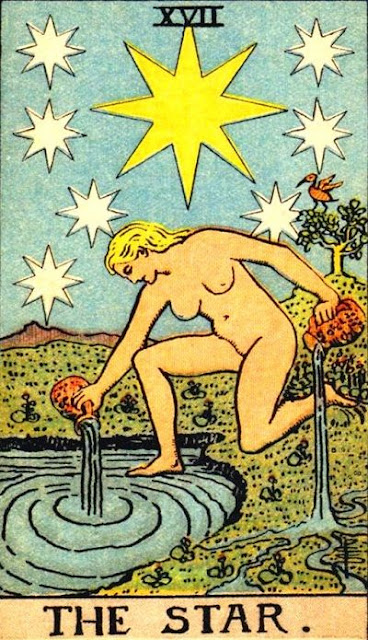 Mars shifts into Capricorn at the buttcrack of dawn this morning, while the Moon in partnership oriented Libra squares Pluto and the asteroid Juno. With Mercury also about to revisit Capricorn tomorrow, this can see a desire to revisit something. Is it too late? The emphasis on Capricorn suggests it’s not. Mars is exalted in Capricorn, and the first face of Mars in Capricorn is a strategic powerhouse in nature, offering one the power to sever oneself from that which binds and prevents further motion upward towards a goal. This is an ambitious transit, and this feeling can be accentuated by the fact that Venus, Pluto, and tomorrow, Mercury, will also occupy the faces of Capricorn. If there’s something or someone you’ve had your eye on, or something you’re trying to accomplish, these transits offer the strategic determination and disciplined forces to go after whatever heights you’ve been longing to reach. Mars in the first decan of Capricorn is difficult to satisfy, and always longs to reach that “next level.” The Moon sextiles Mars and trines Jupiter before entering Scorpio at 7:57 PM PST, lending an optimism and a feeling that with enough fierce determination, anything is possible. These maths can also see a need to rearrange some things and make way for the changes we’d like to see happen. The tarot card associated with the first face of Capricorn, where Mars now occupies, is the Two Of Pentacles, known as the card of “Harmonious Change.” So what is being embarked upon now is a process, a transition, from one phase of life to another. This is a highly motivated Mars transit.

Today see’s the Moon in Scorpio square the Sun and Saturn in Aquarius, opposite Uranus in Taurus, trine Jupiter in Pisces, and sextile Venus Rx in Capricorn. We can be motivated by a dream, a private longing or fantasy, an ideal. The lunar squares to the Sun and Saturn place emphasis on the real world push towards change to make way for this. Later on, a lunar trine to Neptune accentuates the fantasy aspect of whatever this is, and the real life work required or the metaphorical or literal pile of dirty dishes can make what we’re trying to achieve feel even more lofty or out of reach somehow. Mercury re-enters Capricorn at 7:05 PM PST, and it’s proximity to Pluto suggests a dogged determination. Even if there are challenges or delays in the interim, or there is a feeling of a race against time, it’s nothing that a solid strategy forward and a genuine desire to improve things can’t overcome. Mercury is still retrograde after all, and will continue to be until Feb 3, so give yourself permission to step back and refresh your mind and spirit, and give yourself space to think and reevaluate your approaches. Communications and issues around transportation, deliveries, etc, can still be a bit hit and miss, or choppy, but this allows time for revamping new approaches, tying up loose ends, and solving problems. Venus will station direct on Saturday, in trine to Uranus, suggesting surprises, or unexpected last minute turn arounds that can open up new exciting phases and shake up patterns of stagnation that we may have become too accustomed to. So Venus will leave this retrograde cycle enlivened. The end of the week can see a turning point of renewal begin. Don’t give up hope.

Today see’s the Moon in Scorpio trine Neptune, sextile Pluto and Juno, and going on to sextile Mercury in the afternoon. We can be keenly focused on something we have high hopes around. Psychic signals can be highly attuned and we can be picking a lot up from the ethers. Mercury connects to the North and South Nodes, suggesting some noteworthy insights, meaningful connections or ESP moments. Inspiration can be easier to come by today, so even if delays or challenges that both Mercury and Venus being retrograde at the same time tend to bring with them, it also creates opportunities to reflect, reevaluate, and master. Don’t let the slowness of certain things fool you, in fact, if you look around you and within you, you’ll find that you aren’t even 100 percent prepared yet for the breakthroughs you may be desiring to see. This is a chance to get more into alignment. Nonetheless, there may be subtle intimations that some positive shifts are on the horizon, which can create the necessary motivation to keep going.

The Moon enters adventurous Sagittarius in the wee hours this morning, forming a sextile to the Sun in Aquarius and a trine to Chiron in Aries, while squaring Jupiter. This can see some optimism reverberating through our social circles or networks, and there can be a morale boost that can increase motivation levels. Venus and Mars get closer together, officially conjunct today, and this can see passion and determination levels growing, and it’s possible that something can feed our determination levels and motivate us to do more. With Venus conjunct Mars and trine Uranus, this can see a bit more bravery and a cavalier approach, and can bring more dynamism to our endeavors or our interpersonal exchanges. We can be less concerned with what other people think, less confined, inhibited or constrained by others opinions, and hence more apt to take risks or experiment a bit with our approaches. The Moon goes on to sextile Saturn, and perhaps this sets a new precedent or solidifies an alliance or some other foundation in some way. Maybe we find through experimenting that there is something we’d like to do more often or more regularly. Either way, the Mercury and Venus retrogrades are a great time to sort out what is realistic from what isn’t. People can be unpredictable.

Today see’s the Moon in late Sagittarius squaring Neptune, semisquare the Sun, and sesquisquare Uranus. This can see a sensitive, somewhat moody energy that is excellent if you’re artistically or creatively inclined. Feelings can be up and down today, and difficult to express. Maintaining some perseverance and keeping your chin up in the face of any uncertainty you may feel is the best way to handle these energies. The Moon is void of course from 11:00 AM PST, so the majority of the day is best for reflecting and recalibrating, for planning ahead. This weekend will see some decided shifts in the energetic landscape that although perhaps subtle at first, portends a lot of changes. It could actually be really refreshing. So if you can, take today to prepare for this frolicking Goat energy. Venus will station direct tomorrow in the early AM hours of 12:46 PST, so 46 minutes after midnight. This is something to celebrate, as all things Venus ruled can finally begin to get back on track. Maybe it won’t be so subtle at all. Who knows? The Goat does tend to be a bit understated, but the alignments the Moon will make to Venus, Mars and Uranus suggests that this goat energy is ready to bust out of it’s corral and play.

Venus stations direct in Capricorn at 12:46 AM PST, and the Moon celebrates this by heading into Capricorn at 1:09 AM PST. The Moon conjuncts both Venus and Mars, while trine Uranus and sextile Jupiter, getting the weekend off to an earthy, ambitious, passionate, dreamy, playful and perhaps even flirtatious start. This energy basically epitomizes the frolicking goat. A lunar square to Chiron suggests a bit of vulnerability, shyness, coyness or insecurity, but this goat energy doesn’t seem to let that stop it from bouncing around, tail wagging. This can see some surprises or unexpected behavior from others, but it looks like it’s a pleasant surprise. Mars is sextile Jupiter and trine Uranus, and this is an energy that is less attached to end results and is whimsical enough to say “fuck it”, and act in ways that may be out of character but are actually deeply in character. This can see things get shaken up in a fun, whimsical, enlivening sort of way that can feel like a renewal. This energy is literally a wound up baby goat prancing around and bleeting to it’s hearts content like nobody is watching. A fun and exciting Saturday that can see some unexpected turns in dynamics that can bring some life back to dull routines, or bring in some sort of affirming sign that certain dreams, goals, or ambitions are far from dead, and are in fact, very much alive and well.

This morning see’s the Moon in Capricorn conjunct Mercury, Venus and Pluto, while sextile Neptune. This can see a certain dialogue, discussion, relationship dynamic or goal being revisited or perhaps being salvaged or revived at the last minute just when we had consigned it to the realms of “never gonna happen.”  There can be renewed faith around something, or perhaps news that shifts the landscape considerably. In the very least, there is something to ponder. Whatever this is, ideals and inspiration can be high, and the Sun conjunct Saturn and square Uranus suggests that sweeping changes are being made to allow for new life or dynamic changes to be given more of a solid foundation going forward in the future. We may need to be honest with ourselves or others about current limitations and give ourselves time to catch up to the changes going on, financially or otherwise. Mars is boundlessly motivated to make something happen. Venus now direct, still has a bit of a shadow phase to wade through, but has been given the word “go” from Mars, and Mercury is ready to negotiate, communicate, and build bridges. Today could see some important talks, revelations, or points of agreement, or insights being gleaned that make it clear that things are going to be different going forward, and we aren’t settling for feeling only half alive (I:e; half dead) any longer. This is a commitment to authenticity and improvement. Perhaps this is just the current of motivation we’ve needed to revitalize whatever is stagnant or uproot what is below standard or inefficient in our lives. It could take a bit of time to solidify or catch up, but the impetus is there.

Posted by The Curious Girl at 5:19 AM