This week brings some relief, as Venus softens her stance, leaving the unorthodox sign of Aquarius, where she has stood up for herself and created distance, and entering Pisces, where she will become more yielding and sensitive. The square between Venus and Mars has been challenging, but will dissolve over this week, as both planets leave their fixed positions, to end the standoff. Venus enters Pisces on Tuesday, Mars will leave Taurus and enter talkative and versatile Gemini on Sunday the 31st.
Mercury will end it’s retrograde in Pisces and station direct on Friday the 29th, at 16 degrees Pisces. Dust will begin to settle as we get through the shadow phase and regain our footing, having sorted through a variety of feelings. The Sun in Aries slowly but surely distances itself from Chiron, which has been a painful but healing configuration. This can slowly allow for any wounds that may have been brought to light, activated or reopened, to mend. This Sun/Chiron conjunction will remain with us throughout the week, but will lessen over time and be mitigated by other configurations.  All of this can create some kind of movement within stalemate (or standoff) situations that have had a “hardness” or a “coldness” about them. It will take some time, but the proverbial dust can finally begin to settle. 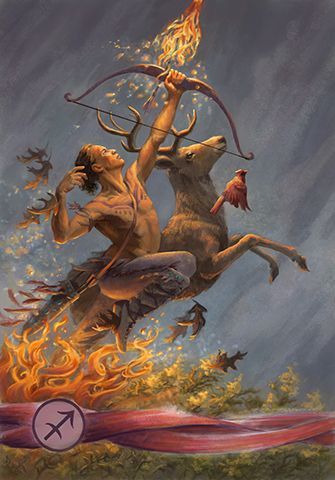 We begin the week with the Moon in Sagittarius, bringing some optimism, goodwill, and expansiveness. A necessary courage amidst potentially sensitive or delicate dynamics due to the full Moon we just had in Libra, with the Sun in close proximity to Chiron. This brought our attention to wounds and sensitivities within interpersonal relations. We’ve got to “feel it to heal it” as the saying goes. The Moon in Sagittarius assists us in developing courage and optimism, and there is a drive towards taking positive initiatives towards healing,  and maintaining a positive attitude in the face of having wounds activated, triggered, opened and exposed through the build up to the full moon that just occurred.

Tuesday see’s the Moon conjoin Jupiter, and square Mercury and Neptune in Pisces. It is clear that our ideals and longings are acutely present, and our desire for a positive outcome, peace, healing and tranquility is fully apparent. Venus reaches zero degrees Pisces at approximately 12:44 PM PST on Tuesday, where a softer, more sensitive, receptive and yielding approach can begin to take hold in partnerships. This sets the stage for a much more empathic landscape, where defenses can begin a process of disintegration. Sensitivities are very heightened, and although the Venus/Mars square is still active all the way to Saturday the 30th, negotiating around tensions and sharing feelings can begin to feel easier as time goes on. Emotional generosity, empathy, and sensitivity is available to navigate any residual fallout or lingering tensions. 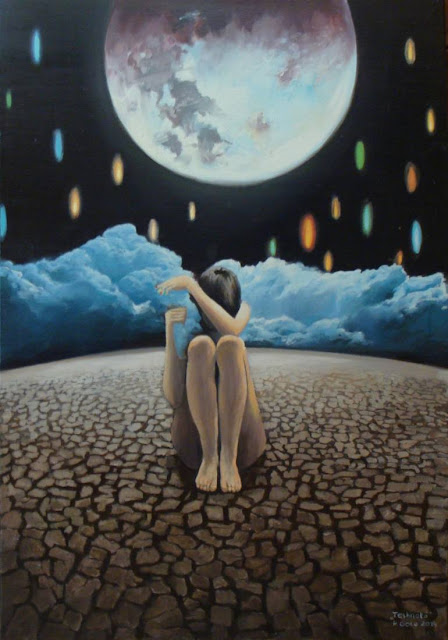 By midweek, the conjunction between Mercury and Neptune in Pisces perfects at 16 degrees, our longings may be considerable at this time, and the idea of detachment, or the awareness of subtle or overt rifts can feel painful. There can also be connections felt that run deep, even when little (or nothing) is said. This aspect though in general is amazing for artists and musicians, as the inspiration and connection to the imaginal realms is significantly boosted. It isn't the most rational time, but it's definitely amazing for creative inspiration, as we are particularly impressionable under these configurations.
Wednesday morning see’s the Moon enter stern and serious Capricorn, bringing a bit of a heavier vibe to the table. Perhaps a “scorned” feeling, or of having been placed “in a dog house” so to speak. An awareness of previous actions that cause a lingering, unresolved guilt, memories that are hard to shake, or simply a challenge to remain positive within circumstances where there have been misunderstandings, rifts, and wounded feelings. Steering clear of negative thinking and staying grounded (and creative/constructive) amidst changing circumstances and shifting dynamics will be important here. A sextile the Moon forms to Venus,  a trine to Uranus, and a square to Chiron, suggests that even in the face of lingering pain, there is forgiveness available, and a desire to move in positive new directions. As long as there is a resolve not to repeat the same mistakes over and over again, there is an opportunity to face down fears and break negative emotional patterns, but it will require courage, consistency, discipline, and patience. There is a chance here to establish better emotional coping skills and relational patterns. 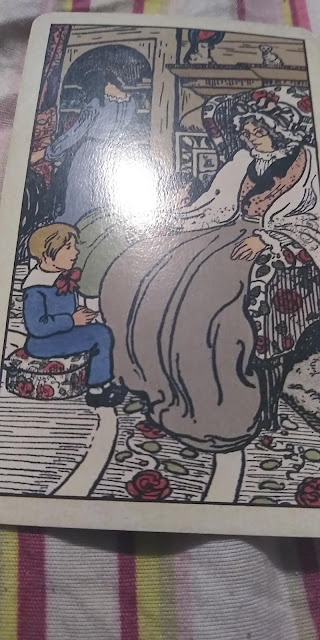 I have a small tarot deck, that is a tribute deck to the under appreciated and little known artist who was behind the famous Rider-Waite deck, Pamela Coleman Smith. This special tribute deck contains two extra cards that are just works of hers, unrelated to the tarot, and are not meant to be incorporated into the deck for use in spreads. However, I actually use them, and circulate them into the deck, and have assigned my own meanings to these “Cards”, and have given them names. One of the cards I simply call “Gramma.” When “Gramma” appears in a spread, it is symbolic of the emotional legacy we have received from our family dynamics growing up. Our attachment styles, and various learned emotional patterns we inherited as children. It is symbolic of how consciously aware we are of how our past, our histories, and our emotional upbringing have factored into our behavior, and whether or not we are setting a better precedent to the examples and patterns we were shown as children. When “Gramma” comes out in reverse, (Reverse Gramma), it is a signal that there is some sort of dysfunction going on at an emotional level, insecure attachment styles, fears, insecurities, wounds from childhood or previous relationships, learned behaviors from what we have witnessed as children or in the past, negative emotional behaviors that we are not letting go of, etc… With the Moon in Capricorn midweek, conjoining Saturn and Pluto, there could be a “memorial of pain” to deconstruct.
Reverse Gramma is very akin to the challenges posed to us by Chiron, the wounded healer, because the wounds of Reverse Gramma run deep. I bring this up now, because astrologically, there appears to be an opportunity available for all of us to confront “reverse Gramma” in ourselves, our lives, and our interpersonal relationships, to flip her into the upright position, where we can use our conscious awareness of our wounds and inherited emotional patterns and traumas to heal ourselves and one another, rather than perpetuate them. “What would Upright Gramma Do?”

By Thursday, the 28th, the serious and committed Moon in Capricorn subtracts a square with Chiron and adds a conjunction to Pluto to go along with Saturn.  But again, the Moon’s sextile to both Mercury and Neptune in Pisces suggests there is some deep healing available, with Venus in the mix helping to cultivate much more sensitivity. This suggests some healing transformations are in the works, even if things are taking some time to find a “sweet spot.”  Dropping any kind of power games and defense mechanisms, and looking deeply into their root causes (often a feeling of insecurity, fear, mistrust, abandonment, etc) will do much to speed along any kind of growth and healing. There is much intensity involved here, with a Lunar conjunction to Pluto. Becoming vulnerable and sharing ourselves can feel scary, but with Venus now exalted in Pisces, the idea of fighting, distance, and maintaining a defensive position, no longer holds as much appeal, and she is working to soften our hearts. Friday, the Moon in Capricorn forms a trine to Mars Taurus, suggesting serious actions are being taken to bring more stability, decisiveness, and sure footedness to what has felt unstable and in flux. Although Lunas conjunction to Saturn can create a lack of self confidence, shyness, and subtly drain energy, the trine to Mars can help rebuild our reserves.  A sextile Mars forms to Chiron suggests there is something deeply healing about actions taken at this time. The Moon also forms a square to Uranus, and this can add a bit of stubborn or erratic energy into the mix. Mercury stations direct, and although much dust is still settling, a period of emotional reevaluation and uncertainty can begin the process of coming to a close. With Mars in the final degrees of Taurus, this will be a decisive time. A positive use of this energy is maintaining courage through trying circumstances. This is a difficult decan of Taurus for Mars to inhabit. In the Tarot, this decan of Taurus is ruled by the 7 of Pentacles. A card of waiting. Waiting for something we have invested a lot into. Prayer and courage are the best ways to handle this energy.  Friday early evening, the Moon shifts into unconventional and emotionally detached Aquarius, forming a sextile to Chiron. Perhaps this offers us some perspective on other peoples pain, and/or allows us to deal with our own in a more detached way. Being able to empathize with others, or see how we may have unintentionally wounded them, -without our vision being clouded or monopolized by a preoccupation with our own shame- is a helpful emotional skill that facilitates healing.

Saturday, March 30th, the Moon in Aquarius forms a sextile to the Sun in Aries, and Saturn in Capricorn forms a sextile to Mercury (now direct) in Pisces. Emotions can perhaps be expressed in a way that is in alignment with our conscious will, and there is a wise, stabilizing influence from the Mercury/Saturn sextile. Perhaps plans are being made, or there is simply a sense of good timing.  Wisdom can be extracted from what may have felt like a maze of incongruence or uncertainty. Some kind of resolution can be felt at this time, and there is an ability to move forward. The square between Mars and Venus comes to an end, and this can bring a feeling of relief.

Sunday morning, the 31st of March, Mars takes center stage and enters quick witted and multitasking Gemini, heralding a busy and communicative cycle, with a focus on variety, and a lot going on. Later, the Moon in Aquarius forms a happy sextile to Jupiter in Sagittarius, suggesting a positive view of the future and things to come. Towards evening, the Moon forms a square to Mars, suggesting that we are perhaps in two minds about something, or perhaps just overstimulated by all that is going on at once. There could also be impatience, argumentativeness, or simply feeling high strung or mentally overwhelmed. The energy of Mars in this face of Gemini is volatile, and can stress the nervous system. It will be important to rest the mind and make time for grounding activities and meditation. Although there is an overall optimistic and expansive note to the end of the weekend, there could simply be a lot of things, activities, and commitments to juggle all at once, and we don’t want to drop the ball on any of them. Being that we are fresh out of a Mercury retrograde in Pisces, it’s a good idea not to rush anything, and to take our time, so as not to overwhelm our nervous systems. This Mars cycle will be extremely expansive, with a whole lot of activities and communications to balance, travel, comings and goings, and generally a lot of things happening all at once. Brace yourselves.

Thanks for stopping by! I hope you all have a great week, I’ll see you next Monday.