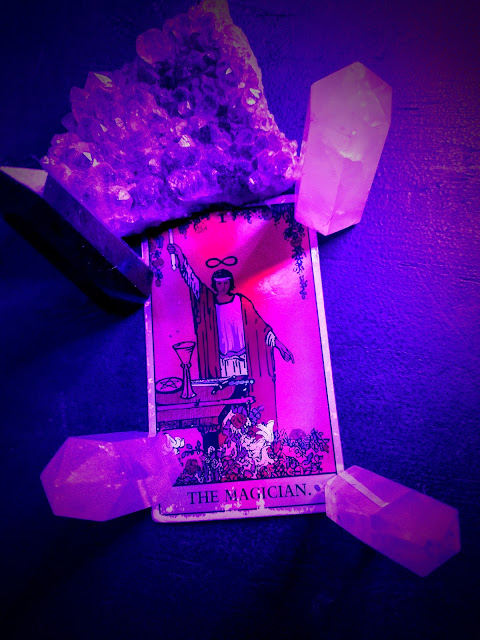 The Moon enters detail oriented Virgo at 2:22 AM PST, to trine Venus in Taurus as we kick off the week. With Venus conjunct Uranus, this can see a sort of preparatory energy, and there can be some shocks, (some of them very positive) to ground and absorb.  The Moon trine Venus can see an ambiance of feeling pleasantly motivated to make improvements. With Mercury now direct and Saturn now retrograde, and the two still in a sharp square, there’s a whittling down process going on around priorities, thoughts and communications. The combined alignments are humble and practical in nature, and it can feel good to simplify situations to their basic and practical elements and eliminate what is superfluous or insensible. These configurations bring people back into the body and bring attention to their own backyards so to speak, and there is much to be appreciative of. Saturn going retrograde brings attention to what’s been missed, overlooked, neglected, taken for granted, ignored, or not given it’s proper due. Squaring up to the North and South nodes, there’s an element of fate, destiny and karma in play. Pluto Rx in the sign that Saturn rules is sextile Neptune. This gently encourages Pluto to disarm, soften, concede, but also brings otherworldly and subtle but profound experiences that can touch people at a soul level. Mercury direct in Taurus is also trine Pluto, producing laser focus. Today can be pleasantly focused on practicalities, and joy can be found in humble places. The Moon later squares the Sun and trine’s Uranus as well, which can see some surprises, nervous energy, problem solving, and multitasking. There may be a lot of changes happening or things to adapt or adjust to or make room for, and this can see a lot of plate spinning or improvisation.

The Moon in Virgo squares the Sun in Gemini while trine Venus, Uranus, and the asteroid Pallas, while opposite Neptune. This can see a strategy being formed around an aim or desire, or a need to improvise. We can be drawn to unusual people or experiences, and the Moon opposite Neptune can see a lot of sensitivity. There can be a lot going on in the local environment, or in regards to communications or transportation that keeps people on their toes. There can be pleasant distractions, but also a temporary need to make some sacrifices for the time being, and take a more strategic, reflective or laid back approach. With the Sun sextile Chiron, there’s a natural sensitivity, empathy and understanding for others, even if certain things prevent them from being on exactly the same page as ourselves for the time being. The Moon trines Mercury and Pluto, emphasizing Mercury’s trine to Pluto, and this can highlight communications, perhaps around working out the details about something, making loose plans, testing the waters, or getting to the bottom of something compelling. There can be a need to follow an instinct, hunch, mystery or strong pull to it’s natural conclusion, but with the Moon trine Pallas there’s also a gentle, measured, organic and strategic approach.

The Moon enters partnership oriented Libra this morning at 8:23 AM PST, where it will oppose Mars and Jupiter in Aries. It can feel like something is building up or reaching a crescendo, and there can be a feeling of optimism. Interpersonal, social, and partnership matters, both business and personal, can seem brimming with possibility or on the verge of turning a fresh page. There can be a lot of enthusiasm around this. As the lunar opposition to Mars grows more intense in the evening, excitement can turn to impatience and stir crazy, so take care to channel the energy constructively in your favor, and don’t allow impatience or frustration sabotage the very things you desire. Whatever is unfolding now is fated and intended to accelerate your evolution and ascension with Saturn Rx squaring the Dragons head and tail. There’s no reason to rush what is meant for you, because it’s already yours.

The Moon in Libra forms a trine to the Sun and opposes Mars and Chiron today. This can see vulnerability and sensitivity in communications. It’s a fluttery, nervous, but extremely driven, possibly even competitive feeling. Ambitions can be lit up as the lunar Mars contacts highlight our desires and drive to go after what we want. Maybe a certain conversation needs to be had. There can be a desire to get on the same page with others, communicate something sensitive or important, or get something in the bag. There can be a lot of communications to keep up with, making people sensitive to timing or what is said or not said (or what may be only implied.) The Moon opposite Chiron is sensitive, compassionate, and psychic. Sometimes this configuration is hypersensitive however, and the Moon opposite Mars is spicy, reactionary, passionate and impulsive. So if something has you feeling vulnerable (or just really passionate), avoid reacting immediately to any perceived slights or dismissals, and take five. These maths suggest an opportunity to find common ground with others and get on the same page through tact, finesse, and diplomacy.

Today begins with the Moon in Libra, forming a trine to Saturn Rx in Aquarius, which the Sun also forms a trine to. The Moon is also square Pluto and quincunx Mercury, which can see mystery and intensity. Something can be quietly stabilizing, and foundations can be laid that have more significance than may be initially apparent. With Saturn Rx trine the Sun in Gemini and the Moon in Libra, there can be a social, community, or interpersonal/partnership element to foundations being laid down now. New communication patterns or establishing new, more harmonious dynamics can be a theme. This can be in the local, everyday environment, community, and/ or via the internet. There can be a strong pull around whatever is unfolding now. The Moon enters intense and reflective Scorpio in the afternoon PST, suggesting there’s a lot to privately metabolize. Something about what is happening now can feel exciting, even somewhat thrilling or intense. Strangely, there may be something low key about it, or we may feel a desire to simply be low key about it and keep it to ourselves, but there can be an inner smile or feeling of excitement and anticipation.

The Moon in Scorpio opposes Venus and Uranus in Taurus, which both perfect a conjunction today at 16 degrees. This can see a certain restlessness and an intense preoccupation with certain things. The Venus/Uranus conjunction can see surprising decisions, revelations, breaks from routine, or highly unusual connections. This conjunction signifies a major upgrade and ascension, but is surprisingly humble or subtle in nature, but exciting. It's an unstable, electric and exciting energy that can keep people on their toes or on the edge of their seats. This can see calculated risks being taken that may have been thought about for a while. Relationships can be under the spotlight somehow, with the Moon trine Juno. This is a reflective, broody, instinctual and lusty energy with intense and electric undertones. The Moon opposite Venus can see people feeling unsure of themselves or awkward or uncomfortable in social situations, so this energy is more prone to slinking off under a nice rock to fantasize and strategize about certain things. The Moon squares Saturn and trine’s Neptune later on, seeing the evening even more prone to private contemplation and allowing oneself to experience a wide array of emotions and instincts. The lunar square to Saturn implies some bashfulness or even blushing around intense instincts or feelings. The lunar trine to Neptune enjoys the process and subtle energies. This can see a preparation for release of certain blockages to make way for a transformation. There is a Full Moon right around the corner that takes place in the wee hours of next Tuesday, so this reflective lunation assists in making way for what is to come.

Today begins with the Moon in Scorpio opposing Mercury, squaring Mars, trine Neptune and sextile Pluto. This energy is like the Golem hiding himself away from intruders in order to dedicate more time and space to pine and scheme over procuring the Precious.  There is a dedication and resilience to these configurations. The drives and desires are strong. The nervous system can be sensitive to external stimuli and the psyche highly attuned to the most subtle impressions and nuance. There can be some self doubt with the lunar opposition to Mercury, but the powerful pulls of whatever is driving us can propel us to enter the hypnotic vortex that both mystifies and frightens us. In the very least, these configurations can assist us in transmuting self doubt into power and personal agency. The Moon enters adventurous and optimistic Sagittarius at 3:31 PM PST, where it forms a trine to Jupiter, and eventually, Mars. This boosts enthusiasm, confidence and a sense of “fuck it" considerably. Self doubt gives way to faith, and there is an embrace of whatever is going on in the higher, spiritual dimensions (which is quite a lot).  The Sagittarius lunation gives way to a charmed “fuck yes” attitude and is eager to dive into the hypnotic, magnetic vortex to emerge renewed and reinvigorated.