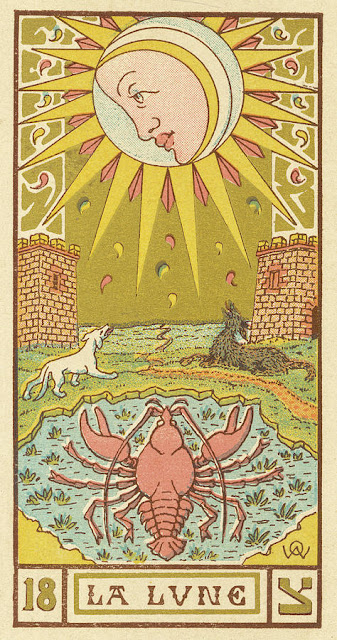 MONDAY JULY 6.
After a Full Moon lunar eclipse in Capricorn that highlighted a defining moment of change and transformation, today see’s the Moon in unorthodox, detached Aquarius making a trine to Venus in Gemini and a sextile to Mars and Chiron in Aries, along with a square to Uranus in Taurus. With the Sun in opposition to the grand conjunction in Capricorn, this highlights opposing viewpoints. People may not be ready to accept certain ideas or perspectives. The Moon’s lunation through Aquarius suggests a lightening up, in the midst of trends that emphasize anything but. These configurations are geared towards letting some fresh air in, and doing things a little bit differently. This can see some forays into new or experimental territory when it comes to the pursuit of pleasure, and there can be some surprising or unexpected happenings interpersonally, and a draw towards the unusual. With Chiron in Aries, having the courage to assert yourself is a factor. Even though Mars is very much at home in Aries and normally has no problem asserting itself, this Chiron conjunction suggests there are some complexes or insecurity to weed out. With so many sensitive issues highlighted by the Sun and Mercury’s retrograde through Cancer having oppositional relation to the planets in Capricorn, there are certain topics that can easily wind people up in hot water. Even if you are certain that you are in the right, others are equally certain of their own position. The Moon rolling through Aquarius can help lighten the atmosphere and place a focus on things that everyone can agree upon. Any effort to combat divisiveness and emphasize what unites us in a common humanity is energy well spent. This lunation also highlights strange, and futuristic ideas, that may go against the grain somehow, or challenge the status quo. Not everyone is ready or willing to biologically merge with their toaster to stay relevant.

TUESDAY JULY 7.
The early AM hours are highlighted by the Moon in Aquarius still squaring up to Uranus in Taurus, which saw a lot of really out there, weird, or futuristic ideas brought into the narrative. The rest of today see’s the Moon void of course, with only a minor tense aspect to Mercury in Cancer. This suggests it’s wise to count to 10 before speaking the first thing that comes to your mind, as this aspect can easily create misunderstandings or frustrate any attempts to get your point across. Regardless, the Aquarian lunation highlights all things weird, unusual, and outside of the box, and there’s no shortage of the utterly bizarre under these configurations. I can’t help but remark upon the trends I see in these configurations that appear to be geared towards dissolving resistance to certain ideas, even through less than savory, or even forceful, or emotionally manipulative means. (Sun in Cancer trine Neptune and opposite Pluto, Mercury Rx in Cancer square Mars.) Mercury square Mars in Aries can very literally shove ideas down peoples throats and make emotional appeals that have little to do with logic or reason. In either case, the fact that nothing is “normal” right now is highlighted by the Aquarian lunation. It’s a case of “weird science” pushing itself into the mainstream, and there is certainly going to be continuous pushback, as Mars remains in Aries for the rest of the year.

WEDNSDAY JULY 8.
This morning begins with the Moon in late Aquarius, forming a trine to Mercury retrograde in Cancer. This can see some unexpected or surprising messages or communications, as the past and the future meet face to face. Something from the past can resurface for reexamination and discussion, and this can bring up a lot of feelings as the Moon heads into emotionally sensitive and reflective Pisces around noon PST, to square Venus in Gemini. Things are still uncertain and dubious, and there can be a lot of confusion present here, with the Moon in tension with Venus there can be some evasiveness around particular topics. The lunar link to Mercury suggests an almost telepathic link, where words become almost unnecessary, but simultaneously there is a desire to communicate. Words in this instance can do more to confuse or mislead than provide clarity. As long as Venus remains in Gemini, there is a flightiness here that prefers to keep things light and avoid being pinned down too much. The link between Venus and Mercury suggests some emotional conversations, but not everyone is on the same page with Mercury in tension with Mars. There are different perspectives here that are difficult to reconcile. In the final hours of the evening the Moon goes on to sextile Uranus, which can bring some surprising intuitive insights, but with a focus on the past, and an incoming link to Neptune, this can also see some strange attempts at revisionist history, and not everyone will be on board with that, as the configurations clearly illustrate some disagreements. Needless to say, the Pisces lunation brings compassion to the fore, but with Venus linking harmoniously to Mars, she will resist too much erosion of boundaries and will stand up for herself if need be. In spite of evidence of disagreement and differing approaches, there is also potential here to make peace, particularly if one can release attachment to specific outcomes or a desire to control others.

THURSDAY JULY 9.
Today see’s the Moon in Pisces trine the Sun in Cancer, conjunct Neptune, trine Mercury Rx in Cancer, square Venus in Gemini, sextile Uranus. The dominant theme of the day is that of confusion, and a longing for comfort and security. Perhaps a certain nostalgia is present that somewhat conflicts with a simultaneous push towards the future, the untried, the new, the novel, and the freedom and independence to choose differently and break with convention. The longing for the comfort of the familiar is very evident in todays configurations, with the Moon syncing up with the Sun and Neptune. The past can seem long gone and out of reach, and can be heavily idealized. These are some highly emotionally and psychologically sensitive configurations, so I definitely encourage an extra dose of compassion and empathy, and to do your best to speak with kindness, as many people are really feeling lost at sea, on a ship without a captain, and could use some words of comfort or reassurance. There can be a sort of “clinginess”, victimhood, and dependency to these configurations, and equally, the stoic, stiff upper lip of the Grand conjunction in Capricorn has little sympathy to offer, (so if you happen to have a lot of Cap in your chart, or Cap rising, understand that without realizing it, you could be coming across to others as rather cold, distant, or too preoccupied to care very much, even if internally, you care a whole lot.) There’s a chance of feeling alienated under these configurations, and this statement applies to just about everyone, albeit, for different reasons, regardless of chart rulership or ascendant. The Pisces lunation can bring up a lot to reflect upon, and everyone is kind of just feeling things out and making them up as they go. These are some dreamy and reflective maths that can see the day sort of ambling off into a fantasy world of ideals, memories, longings, and emotional comforts. Try not to focus too much on what you feel you’re lacking, and also, try to avoid over idealizing the past or other people. Once again, the maths make a strong case for nurturing a strong internal locus of control. Positively, a lot of psychic impressions can be picked up from the ethers, and receptivity is very high, (but equally, so is defensiveness with the Mercury square to Mars and Chiron.) Nonetheless, it’s easier to empathize with others.

FRIDAY JULY 10.
This morning see’s some really good vibes, with the Moon in dreamy Pisces conjunct Neptune, trine the Sun in cozy Cancer, and sextile Jupiter, Saturn and Pluto in Capricorn. This can see some forays into enjoyable and tranquil activities, with some gusto. This definitely favors the arts, music, enjoying the fruits and flowers of the earth, and can see some pleasant imbibements. With Mercury preparing to station direct, and square Mars, there can be some minor glitches or annoyances, but for the most part, this is a pleasant, drifting energy. The lunar sextile to buoyant Jupiter, as well as stable Saturn, and intense Pluto, all in earthy Capricorn helps ground and center amidst the otherwise emotive , dreamy, etheric configurations. Today can be imaginative, and creatively productive. Around 10 PM PST, the Moon shifts into action oriented Aries to conjunct Mars, Chiron, and square Mercury. This can see more assertive or forward communications, or a lot of activities around the home or in the local environment, with an emphasis on healing, mastering, restructuring, building, and boosting morale in some way. The Moon in Aries square to Mercury about to station direct tomorrow, can see some mental and emotional restlessness and impulsivity that seeks a fulfilling outlet.


Today see’s the moon in Aries conjunct Mars and Chiron, and squaring Mercury in Cancer, which is about to station direct on Sunday. Chiron stations retrograde today, which can signal a journey of going over old wounds in an effort to heal them. This weekend can have some awkward moments and general glitches or misunderstandings to navigate, as the impacts of retrogrades are most pronounced at the station. So it’s a good idea to remind yourself frequently this weekend that “this too shall pass.” Today also see’s a lunar sextile to Venus in Gemini, which can help smooth any misunderstandings and keep communications from going too far off the rails. It also speaks to the influence that diplomacy, humor, cleverness, and a gentle finesse can have on lowering defenses and navigating disagreements and opposing opinions. Needless to say, there can be a forceful, impassioned, and impulsive trend under the Aries lunation, and people are more apt to stand up for themselves and maintain their independence. With the Moon/Venus/Mars link up, maintaining independence and self ownership, while keeping interactions light, variable, intellectually stimulating, and numerous has a natural appeal. This may not jive well with the more cloying or clinging nature of the Sun and Mercury in Cancer, as the clash between the Moon/Mars in Aries and Mercury in Cancer illustrates. As long as Venus remains in the flighty sign of Gemini, don’t expect to be able to pin people down for too much up close and personal heavy breathing type of enmeshment. Venus in Gemini prefers a little room to breathe and maneuver, and is infinitely curious and easily distracted. The Moon/Mars/Mercury contacts today can see some irritability or impulsiveness. Try to give people the benefit of the doubt and avoid taking things too personally and running with it. The day is well suited for building energy, taking independent initiatives and enjoying light social exchanges, although there is a subtle “warrior energy” to these configurations. It could see differences in opinion come under the spotlight. Tomorrow can see some heightened intensity.
Posted by The Curious Girl at 5:16 PM