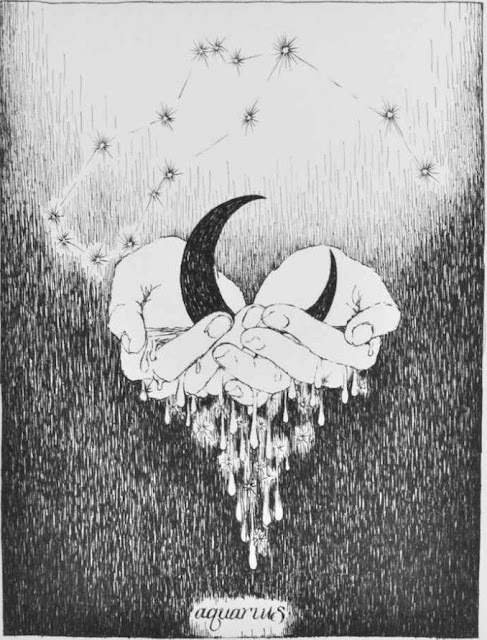 MONDAY FEB 3.
We begin the week with the Moon in communicative, multitasking Gemini, squaring up to Mercury which has just entered Pisces as of this morning.  This suggests that there could be some conflicting emotional information to sort out, decipher, and attempt to make some sense of. These configurations can see Monday get off to a groggy, spaced out start that can make it a bit difficult to concentrate and focus. Mercury in Pisces isn’t exactly well suited for logical undertakings that require rational analysis and sticking to the facts, and is more disposed towards the imaginal realms. Any fugazi experienced recently due to Mars in Sagittarius square to Neptune can feel somewhat magnified today. A lunar trine to the Sun in Aquarius later on encourages an elevated emotional detachment from any vexing riddles or foggy territory for the time being. (The mere act of thinking straight is undermined enough as it is.)  There will be plenty of time to venture down Mercury’s rabbit hole as it will spend a longer than usual time in Pisces due to the upcoming retrograde. It will station retrograde on Feb 16th at 12 degrees Pisces. This particular Mercury cycle will attempt to make sense of feelings, impressions, and other such emotional mysteries, to decipher fact from fiction, hopes and fears from delusion, and release any psychological detritus that blocks a clear path forward. Mercury in Pisces can offer a lot of good creative fodder, psychic impressions, spiritual experiences, and generally bring feelings closer to the surface and heighten sensitivity.


Today see’s the Gemini Moon trine the Sun in Aquarius, opposite Mars in Sagittarius, and square to Neptune. So yea, interpersonally, things might be a bit of a confusing mess, but again, the lunar trine to detached Aquarius places a gentle hand on the shoulder and just say’s “stay above it. Don’t let it get to you, keep your head about you.”  The Moon opposite Mars can feel kind of frustrating, pressured, or scattered, or magnify a feeling of being blocked somehow, whether by internal resistances or external circumstances. This can create a sort of antsy feeling, but can also serve as a sort of "charge". The squares to Neptune can make it feel like all efforts come to naught and can feel somewhat demotivating at times, like funneling energy, passion, drive, or enthusiasm into a black hole. This will pass. If you’re feeling all “at sea”, just try to stay focused on your own goals that don’t require input, participation, or reliability from anyone else, because there is actually a lot of energy and motivation available, and a lot of compassion as well. The Moon/ Mars opposition can be kind of grumpy, argumentative, and irritable, so if you find that your own will is in conflict with that of others, just try and channel this into some kind of physical activity or do something to help you let off steam. Later in the evening, a lunar square to Venus in Pisces highlights subtle interpersonal tensions, or confusion, perhaps regarding being in two minds about something or someone, or simply a lack of clarity. It can also be really imaginative and idealistic, really good for creativity, aesthetics, and the arts. However, it’s clear in this math that something is a bit maddening or confusing, and it’s possible that any attempt at confrontation or communication around it would probably only make it even more slippery for the time being. Conversely, this could also be catalyzing, inspiring, and stimulating, especially creatively or spiritually, and could even produce some pleasant experiences interpersonally, or some imaginative ideas if you're an artist or musician. Venus and Neptune are both about making life more beautiful, and prefer to avoid anything harsh or unpleasant. Perhaps tomorrow would be better suited to approach any delicate, sensitive, or awkward topics if you've got a bone to pick with someone. For now, maybe just pull a John Lennon and Let It Be.

WEDNSDAY FEB 5.
Today, the Moon shifts into emo Cancer around 11 AM PST. This see’s the Moon square Chiron in Aries, sextile Uranus in Taurus, and most importantly, trine Mercury in Pisces. This combined with Venus and Mars no longer in square to one another, and Venus and Saturn in harmonious sextile, suggests that people may find it easier to broach certain topics or express certain feelings that have been difficult to discuss or articulate before. These configurations also suggest we could receive some unexpected or surprising news or communications. Something could come to light that perhaps illuminates  or enlightens us to something that maybe we were previously unaware of. This is a bit of a “confession” type mathscape. The lunar square to Chiron suggests a lot of vulnerability, and perhaps not everything is easy peasy to talk about or reveal (or have revealed to you.) But the positive side is that dialogue is flowing where it perhaps wasn’t before. People could be getting some things off their chests under these configurations, and there could be some surprising things uttered. People can be more apt to talk about their feelings, and this can take emotions into new or surprising directions. With Venus in the late degrees of Pisces and getting closer to Aries (and Chiron), and with a full Moon around the corner in Leo, much right now is all about building up courage and confidence for new beginnings. Today some sort of floodgate is opened that makes it easier for people to open up emotionally and otherwise, and there is a lot of receptivity and compassion available, even if what comes to light isn’t 100 percent easy to swallow or deal with.  These configurations definitely show an element of surprise, and can help bring awareness to where it was lacking before. Perhaps light is shed on matters that have seemed mysterious or confusing.


THURSDAY FEB 6.
Today see’s the Moon in Cancer still trine Mercury in the early am hours, but also trine Neptune, and opposite Jupiter in Capricorn. This can definitely see the feelings somewhat magnified, and boundaries can be somewhat blurred. It’s possible to be preoccupied with whether or not we’ve shared “too much”. The Moon in Cancer is concerned with security, with safety, and the opposition to Jupiter in Capricorn can bring this to the fore. People want to be sure they are making the right/safe choices, and aren’t being bamboozled. Regardless, there is a compelling pull to dissolve certain barriers and be more emotionally open and receptive. As early evening arrives however, the Moon goes on to oppose Saturn and Pluto as well, and this can add some intensity around doing so. These configurations can magnify fears around vulnerability, and for some can see some reflexive defense mechanisms and walls flying up complete with moat, drawbridge, and alligators. We are reminded of the need to be circumspect, cautious, or strategic, but it doesn’t mean we need to close off entirely. Again, with the full moon around the corner, much of this is simply a matter of developing courage and confidence.

FRIDAY FEB 7.
The weekend starts off rather eventful astrologically speaking. We begin Friday morning with the Moon in late Cancer trine Venus in the final degree of Pisces, and also trine Chiron in Aries, while still opposing Saturn and Pluto. There is a lot of intensity in this math, as it’s also leading up to a full moon. This math is interesting and a few things could be going on here. On the one hand, it appears to be the closing of one door and the slow opening of another, or in other words, boundaries being placed in one area and removed slowly in another. Venus moves into assertive Aries around noon PST, heralding new beginnings interpersonally and/or materially/financially. So the phasing out and phasing in of something is very evident here, and whatever this is requires a LOT of courage, and for our confidence levels to be very on point. Around 2:45 PM PST, the Moon enters showy and theatrical Leo, squaring Uranus in Taurus, trine Venus in Aries, and Chiron. This is some pretty radical stuff, and I can’t emphasize doing whatever you can to increase your levels of self confidence enough, as it’s literally the key to unlock the best of this math. This can definitely see some big changes happening interpersonally and/or financially for people, but relationships in general are really highlighted here. There could be a lot of excitement around whatever this is, but also the potential for drama and theatrics, (so try to stay clear of going full Soap Opera or Jerry Springer.) Build ups to full moons are always intense and tend to magnify everything. Personally, as a musician, I’m just looking forward to some fire AF freestyles. For the rest of you, it’s highly possible you could be seeing some healing new beginnings, particularly in the relationship department. Least of all, in the *self love* department. In the very least, a phasing out of shitty, undermining situations or dynamics, and the arrival of fresh, inspiring, life affirming ones. If it’s sucked the life and joy and confidence out of you, this Full Moon in Leo will have you like “yea so.. I was thinking..fuck this.” You aren’t gonna take it anymore and it’s exciting. Go you.

SATURDAY FEB 8.
Today see’s the classic Moon opposite Sun configuration known to all full Moons. With Venus now in Aries and conjunct Chiron, there can be more of a feeling of “urgency” and impatience around the pursuit of pleasure and doing what feels good. With the Moon in Leo, the emphasis is definitely on fun, enjoyment, and following our bliss. The actual full Moon doesn’t perfect until 11:33 PM PST tonight, but needless to say, the energy of the full Moon will be felt all day. Around 7 PM, the Moon in Leo makes a trine to Mars in late Sagittarius, which really ramps up enthusiasm and energy levels quite a bit, as this is an adventurous aspect that can make it hard to sit still. This can definitely see people on the move/on the prowl, in search for some fun mischief to get themselves into. It’s definitely a creative, enthusiastic, curious, courageous, and exploratory vibe that wants fun, fresh stuff to happen. This could see people work up the balls to take the initiative around something or break new ground and enter into new territory somehow. It looks creatively stimulating to say the least.

SUNDAY FEB 9.
Today begins with the Moon in late Leo, trine both Mars and Uranus. This suggests that whatever’s got our mojo going will require changes and preparation on the physical plane. The first half of the day looks fun, stimulating and exciting, with a lot of spontaneity thrown in. The Moon enters detail oriented and anxious Virgo around 4 PM PST, and opposes Mercury in Pisces. This could see a little bit of indecision, subtle anxieties or doubts in the background, but the lunar trine to Uranus is much stronger and pushes us to bust out of ruts or comfort zones. There may be a lot that’s still unclear or that feels unresolved or foggy, but equally, there will be a lot of determination to sort it all out and get to the bottom of it. The Virgo lunation encourages attention to details, and the need to get organized and efficient, make improvements, fix what's broken, and prevent problems from escalating. Mars will move into Capricorn next week, which will see a major push to completely overhaul something or take concrete actions around something we feel deeply invested in and determined around. Next week, it’s time to get cereal.

Thanks for reading! Stay curious fam, I’ll see you next Monday.