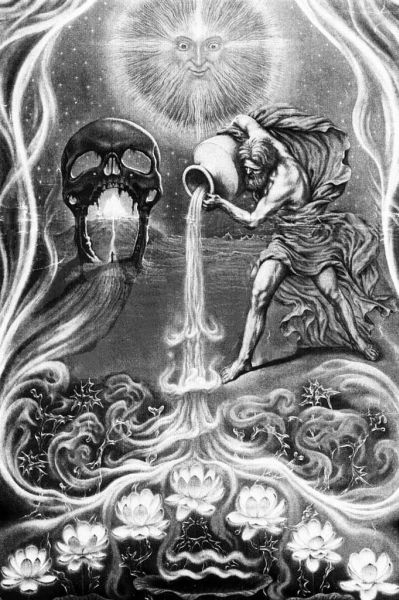 MONDAY JAN 27.
We begin the week with the Moon in Pisces conjunct Neptune and Venus, while Venus in Pisces still squares off with Mars in Sagittarius. This highlights some interpersonal tensions where not much is very clear, but there are a great deal of hopes, possibly to the point of naivety. This math is a bit easier to deal with if you’re merely refraining yourself from a particular action, but is less so if you feel extremely passionate about something and expect others to want the same thing as you. These configurations are well suited for release. It may not be easy in some cases to simply let go, but is preferable to fighting a losing battle or merely feeling manipulated. Mercury in Aquarius sextile Mars in Sagittarius wants to get at the truth, and is interested in producing outcomes that are favorable to everyone. This is difficult when it seems like certain facts or realities are  deliberately obscured, and this can create an uneasiness, but there is definitely a lot of compassion in these maths, with the growing emphasis on Pisces. The afternoon see’s the Moon sextile Jupiter in Capricorn and square Mars in Sagittarius, which can see our empathy levels raised in the face of any difficult realities others (or ourselves) are facing, so there’s a lot of magnanimity available, even in the face of delays, challenges, or unknowns. If you’ve got no troubles to speak of, this math is actually pretty favorable for creative inspiration, but can also see some running around to solve problems, either our own, or on behalf of others. Some problems just need to be allowed to resolve themselves as too much interference in the natural processes can only seem to prove a waste of energy. Again, the Pisces lunation next to Venus and Neptune is about release and letting go. The New Moon we just had in Aquarius pointed towards the future, and the possibilities therein. Mercury will eventually dip into Pisces momentarily, to focus on further release, and then backtrack again back into Aquarius, stationing retrograde on the 16th of Feb, to revisit the “possible futures.” For now, many are in a sort of “limbo state”.

TUESDAY JAN 28.
Tuesday begins with the Pisces Moon conjunct Venus and Neptune, square Mars, and sextile Saturn and Pluto in Capricorn. Normally the Moon square Mars might be kind of energizing, but this one can actually see energy on the low or perhaps drained side, as Pisces/Neptune tends to dissolve what it touches, (in this case, our drive and motivation can be affected and it can maybe feel a bit unclear as to where to aim it.) But the lunar sextile to Saturn and Pluto can add some sense of stability and a feeling of finding our footing, even amidst quicksand. This can also see us setting limits or boundaries for ourselves or in regards to others, in order to create more structure and definition in what can feel like a fugazi or in the very least, a circumstance in much flux. With Venus conjunct Neptune, there is a dissolution or “phasing out” of one interpersonal chapter, and with Venus square to Mars there could also be some resistance to facing particular truths. A sort of “glossing over” of certain realities and a “clinging” to castles made of sand. There is some denial evident in this mathscape, but the aspects to Saturn and Pluto in realistic Capricorn emphasizes a sort of “coming to terms” process, where it’s clear that there is more empowerment to be gained by being starkly realistic and focused on what we ourselves have control over, than there is by being caught up in a fantasy, or swept off on a naive crusade to gain the cooperation of others around some dream or other that we don’t want to see die. As the Moon get’s closer to Chiron in the later hours, it’s evident that whatever is around the corner that will call us to take the wheel of our life more firmly into our own hands and take certain initiatives, can perhaps have us feeling somewhat vulnerable, and will be a question of confidence. The lunar conjunction to Venus all day however, is rather pleasant, but also depends very much on a persons relationship to The Void. If silence or unknowns make you uneasy or afraid, this is an opportunity to cultivate more faith in the universe and take a more mystical perspective, and frankly, just try and feel good, here and now, as these configurations can generate a lot of longing for some far off distant reality, past or present, or make a “vacancy” or “vacuum” in ones life seem a bit more evident. Nature abhors a vacuum however, and there are new beginnings right around the corner, but they will require taking independent initiative into unknown territory. For some, the proposition of embarking on a new chapter alone, independently, can feel a bit lonely, especially if such territory is alien to them. But this is an exercise in confidence, and as self confidence builds, as it will naturally tend to do when we surprise ourselves or exceed our own expectations, or prove to ourselves we are much stronger than we think- such a journey can’t remain lonely forever.

WEDNSDAY JAN 29.
This morning we see the Moon in Aries conjunct Chiron, and going on to sextile the Sun in Aquarius and an eventual square to Jupiter in Capricorn. This could see the potential of certain vulnerabilities to feel magnified. The necessity to focus on the relationship to the self as an independent and whole entity, the place in which all other things spring forth, and which all other relationships are based on- is highlighted here. Key words I can extract from these configurations are self worth, self confidence, self definition, independent initiative, goals, wishes, individuation, and future directions. The square to Jupiter in Cap can blow this out of proportion somewhat and maybe see some peoples defenses overly magnified, but it can also help facilitate the appropriate backbone for decisive or self affirming moves-which in the long game: I cannot overstate the fact that our relationship to self determines our relationship to all others. Therefore, it isn’t actually a selfish act to make sure it’s a really good one. With Venus conjunct Neptune and square Mars in Sagittarius, certain dysfunctional elements within relationships are in a dissolution process. Relationships can be a complex area for many in 2020, due to both Venus and Mars going retrograde in the same year this year. So making sure that you’re super tight with yourself, -first and foremost-is the best way to prepare for this ride.

THURSDAY JAN 30.
This morning starts out on an energetic note, with the Moon in Aries trine Mars in Sagittarius and square Jupiter in Capricorn. In the afternoon, the Moon goes on to square Saturn and Pluto. This energy is kind of feisty, passionate, and obsessively focused on something. Venus in Pisces now forms a sextile to Pluto in Capricorn, for some this could see a yearning to lose ourselves in something or someone, or to totally merge with it/and/or them. If this is a creative project or something you have full say in/control over, fuck yea.   Get it all up on you. If this requires someone else’s cooperation or wanting the same exact thing/feeling the same way as you-take care. I’m not saying that isn’t possible, I’m just saying-make sure you have an accurate assessment of the facts, as opposed to a gross over idealization, -or even a deliberate misrepresentation by another person,  because Venus is also squaring Mars, and conjunct Neptune, while Mars is also squaring Neptune. So there’s a lot of… fogginess, confusion, and fugazi. There's also a lot of serendipity, spirituality, high ideals, hope, and compassion. Needless to say, this is a passionate, energetic, enthusiastic, if kind of obsessed, idealistic day, and there could be some blockages, delays, challenges, pressures, or frustrations encountered that could require improvisation, innovation, or inspire new directions or initiatives over the weekend. We might even feel sort of egged on and inspired by any challenges, long shots,or"impossible odds", even if we feel somewhat intimidated by them.

FRIDAY JAN 31.
Today begins with the Moon in Aries sextile Mercury, trine Mars, and square Saturn and Pluto. The Moon in late Aries also builds a conjunction to Uranus in Taurus. These configurations can see the courage to confront something or someone, or we may receive a communication (somewhat out of the blue perhaps?) In either case, people can be feeling a bit more courage to assert themselves, particularly in the early AM hours. Towards 5 PM, the moon enters sensual Taurus, shifting the emphasis on to creature comforts, but also bringing some surprising or refreshing elements to the mix with the conjunction to Uranus. Venus in Pisces also forms a sextile to Saturn in Capricorn today, bringing more of a sense of stability or sure-footedness to interpersonal relations that has perhaps been lacking. Things can begin to feel a bit more settled or as if some kind of progress is being made, even amidst change, great differences,  uncertainty, or disagreement. Almost as if we’re in the water and we finally feel the solid bottom with our feet to know once and for all how deep it actually is. It’s somewhat reassuring to know the “lay of the water”.  It’s somewhat reassuring to know the “lay of the water”. Stabilizing, reassuring, inspiring vibes can help us feel more anchored, confident, and inspired about potential new directions.

SATURDAY FEB 1.
Today see’s the Moon in Taurus trine Jupiter in Capricorn, and conjunct Uranus. This can see people trying new things or new approaches, in an effort to cultivate more stability and solidity within change. The Moon in also forming a square to the Sun in Aquarius as well, and it could be that we’ve got our own ingrained patterns and resistances to confront. Otherwise, this is a quietly optimistic, and future oriented energy. The evening hours throw in a lunar sextile to Neptune that can see Saturday wind down on a dreamy, contemplative, and quietly pleasure seeking note that can make it easy to find joy and beauty in simple things. Alternatively, it can also have some people focused on what is missing, or longing for something just out of reach, as if it's so close we can taste it. Things are lining up slowly but surely, but require some patience and sturdiness to bring to fruition . If you find yourself feeling wistful or being dragged out of the present tense, try and find some small and simple ways  to ground and enjoy yourself, -and the process. You’ll be glad you did.

SUNDAY FEB 2.
Today see’s the Moon in Taurus trine Jupiter, Saturn, and Pluto in Cap, and sextile Venus and Neptune in Pisces. This is beautiful, I don’t know quite what to say. Apart from a lunar square to Mercury in Aquarius, creating subtle blockages or challenges in communications, which isn’t even that strong, this math looks utterly chill and delicious . Serene and beautiful. It not only bodes well for creative endeavors, or simply enjoyment/appreciation for music/the arts, but interpersonal relations can be smoothed over, positively stimulated, and can gain traction, under these pleasant, stabilizing influences. In the very least, this looks like a , fun Sunday ,where things can just flow if we let them. Tuning into the body and the 5 senses and slowing down to enjoy tactile and aesthetic pleasures, especially if you’ve been stressed, anxious, or living at a break neck pace, can help you get the most out of this delicious looking math.

Thanks for reading! Stay curious fam. I’ll see you next Monday.

Posted by The Curious Girl at 6:44 PM