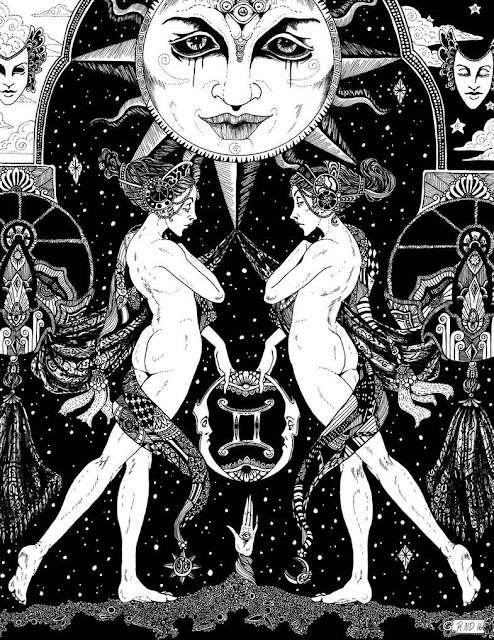 MONDAY JUN 15.
Monday see’s the Moon in Aries, sextile the Sun in Gemini, and square Mercury in Cancer and Jupiter and Pluto in Capricorn. The Sun in Gemini square to Mars in Pisces can cast a loopy, surreal, distractible light over things. The lunar square to Mercury, Jupiter and Pluto, places emphasis on impulsive, (or compulsive) communications or thinking, that can see certain incoming or outgoing communications or information received that has amplified impact.

It’s possible too for there to be fixatations on something (or someone), or several somethings (or someones,) and the mental and emotional energy is amplified or intensified in some way. Some people might be replaying certain scenarios or conversations over and over, the lunar square to Pluto can see certain fixations or compulsions, and can also see people act on impulse or instinct. It can be a fiery, passionate energy, somewhat subdued or confused by the planets in sensitive, deeply impressionable water signs.

The lunar links to Jupiter and Pluto can lend a somewhat passionate, inward reflection for some, maybe even a compulsive self analysis, or an examination of incoming and outgoing stimuli, as the Sun in Gemini spotlights communications, while Mars in Pisces blurs boundaries, mystifies, and confuses.  Certainly interesting times, that can even confuse the drive and the will itself. The Moon in Aries wants to add life and vitality to things, and Pluto beckons into taboo territory, and alludes to the lure of the hidden, the buried, the forbidden, and the deeper machinations and implications behind things. Certain power dynamics can be amplified between self and others. In the very least, it’s a powerful vibe in the atmosphere that lends an instinctual intensity and mysteriousness to the day that can almost be somewhat disorienting. The Sun and Venus Rx in Gemini can see a lot going on, and a lot to pay attention to. It’s a highly mental, cerebral energy that can require pockets of tranquility or undisturbed serenity to reflect upon information, news, communications given or received.

TUESDAY JUN 16.
Today begins with the Moon in down to earth, sensual Taurus conjunct Uranus and square Saturn in unconventional Aquarius. With Venus in Gemini trine Saturn, this can highlight a lot of interpersonal changes, and the lunar conjunction to Uranus can see some surprising developments. Perhaps a desire to shake up existing routines, or begin a process of setting new ones in place. There can be some low key excitement at certain changes or surprises, although the square to Saturn through the earlier part of today can see issues of certain things being slow going or poor timing. This eases up as we head closer to evening. It’s possible there’s just a lot of changes going on all at once, and certain surprises or unexpected developments may take a moment to adjust to. Mercury will station retrograde tomorrow in the sign of emotional Cancer. This could see certain conversations revisited, or previous ideas that may have been temporarily or otherwise, shelved, stalled, delayed, forgotten, or abandoned. Mercury heading backward under the Taurus lunation suggests that much that is unexpected comes up for reconsideration, reflection, or revision. Tomorrow may see some surprising news, communications, or exchanges that can expand horizons, or generally boost morale or be beneficial in some other way.


WEDNSDAY JUN 17.
Today see’s the Moon in easy going Taurus conjunct Uranus and sextile Mercury in emotionally sensitive Cancer. This can see some unexpected but pleasing communications, or bursts of inspiration and insight. Mid morning see’s the Moon trine Pluto, and it goes on to trine Jupiter and sextile Neptune, so it’s possible that whatever comes up inspires transformation and can see a desire to change things for the better. Mars also making harmonious aspect to Pluto can see a rather intense undercurrent or pull towards something. It isn’t unpleasant, but there can be an element of inevitability here, a strong, unavoidable current or pull that creates a compulsive quality, and there can be something deeply unconscious and instinctual about why we’re doing whatever we’re doing, or drawn towards whatever or whoever we’re drawn towards, or why certain things or people are drawn towards us. There can also be some impactful synchronicities. This is excellent energy for making some positive transformations and getting organized, but there’s also a creative and mystical twist to whatever is occurring that can see high hopes and ideals stoked, and a lot of inspiration to go around. Mercury stations retrograde in Cancer at 9:59 PM PST tonight. Evening time see’s the Moon sextile Mars in Pisces, which can add a subtly energizing oomph to inspiring trends. There can be a lot of impressions to gather with the Sun in talkative, multitasking Gemini square Mars in etheric, passive Pisces. The Taurus lunation has sought to make things more interesting, and it looks like it’s succeeding. There’s a mysteriousness afoot, and the imagination can be very stimulated this evening. Things will come up for reconsideration or a second look during this retrograde cycle.

THURSDAY JUN 18.
This morning begins with the Moon in late Taurus, forming aspects to Venus, Jupiter, Saturn, and Pluto. This can see some enrichment come into our lives via interpersonal exchanges, and certain changes unfolding can widen our lens on the world a bit and have long term implications. Mercury, now retrograde, squares Chiron in Aries, and this can illuminate areas where we may be guarded or there can be a need to build confidence, and avoid jumping to worst case scenario conclusions regarding communications, or a reactionary defensiveness. There can be an element of self protectiveness here. The afternoon see’s the Moon shift into talkative and curious Gemini, to trine Juno in Libra, emphasizing a focus on pleasure and enjoyment through communication with those in our local environs or short trips. This can see enjoyable connections being formed that are based on shared interests, hobbies, or values, and it can be nice to get a conversation going. The link to Saturn in Aquarius can show something unconventional and refreshing about this, and emphasize the potential for milage regarding projects, friendships, or relationships. It could be some people are just looking at something or someone in a new way or seeing potential that was previously not considered. There’s a highly experimental vibe to all of this, and considering we now have both Mercury and Venus retrograde, there can be opportunities to take a second or third look at something, (but there’s also the potential for miscommunications, misunderstandings, or glitches along the way.) That being said, it pays to take your time in forming conclusions, and try your best to go with the flow and avoid reactionary behavior, as it can take a while for the confusion and changeability of previous weeks and months to settle. A good time to intentionally slow things down. This energy can see the foundations of something beginning to form, and with a New Moon in Cancer on Saturday coinciding with the Summer Solstice, a seed can be planted.

FRIDAY JUN 19.
The weekend kicks off with the emphasis on communications, with the Moon in busy and talkative Gemini conjunct Venus, trine Juno, and sextile Chiron in Aries. This can be somewhat pleasant and uplifting, and can see certain talks, interactions, or exchanges with others, either via text or in our local environment bringing a sense of enjoyment, stimulation, and subtle boost in morale and confidence. Mars in Pisces making sextile to Jupiter, Pluto, and conjunction to Neptune may have seen some highly unusual, fated feeling occurrences this week, and a sort of inexplicable inevitability about what’s been unfolding. Towards evening, the Moon in Gemini squares Neptune, which can see some bemusement or confusion, which can see the evening take on an imaginative, dreamy, spaced out and escapist tone, but can be highly creative. It may take some time to wrap our heads around certain strange happenings, particularly regarding interactions.

SATURDAY JUN 20.
Today see’s the Moon in Gemini square Mars and Neptune in Pisces, emphasizing the Sun’s square to Mars in Pisces, as well as Mars’ aspects to Jupiter, Neptune, and Pluto. This is a generally bemused energy, and we may not understand what’s driving our own or others behavior, but simultaneously can’t seem to escape certain pulls, curiosities, or compulsions. With the Mars link to Pluto, something might have a subtle hold on us and it might be hard to figure out why. There might be an urge to communicate something, but maybe hard to know what to say. Mars in Pisces is rather shy, passive, and indirect, so there could be a certain passivity and inward reflection to the day, a drive to retreat into oneself and seek peace and quiet perhaps. But a whole lot of thinking and feeling is going on. There’s plenty of stimulation for the imaginative and creative faculties. Moon square Mars can also be somewhat frazzled, impatient, easily irritated or emotionally reactionary. There can be a bit of “loneliness” to this aspect, but there’s also plenty of energy to be channeled into creative or expressive activities. The Moon heads into Cancer in the final hours of the evening, placing the emphasis on seeking comfort and familiarity. The New Moon in Cancer occurs at 11:41 PM PST, squaring Chiron and conjunct Mercury Rx in Cancer. This can highlight a desire to communicate the feelings on the one hand, but also a guardedness, vulnerability, and self protectiveness on the other.

SUNDAY JUN 21.
Still reeling from the energetic impulses of the new moon/ Solar eclipse at zero degrees of the Crab, today see's the Moon at home in nurturing homebody Cancer, conjunct Mercury Rx, square Chiron and Juno, and sextile Uranus in Taurus. This can see some emotional and physical restlessness and pronounced desire for change. Unexpected communications can occur, or spontaneous, instinctual or compulsive feelings can seek expression. Perhaps we take a risk and challenge ourselves, or someone else does. It’s possible what ensues is surprising and maybe we don’t know quite how to react. Things can be keeping us on our toes and require quick thinking and innovation. There is definitely something new or experimental about whatever’s happening, and it’s possible this places us in new, untried territory. Timing could be off, with both Mercury and Venus rewinding, so things may take patience to get off the ground. But these impulses  may challenge us out of a comfort zone that maybe we’ve become a little too accustomed to. Sometimes change can feel intimidating or threatening. This can see some surprising things revealed, and even if there’s some indications of feeling subtly challenged, it seems to be in a good way, that we’ve needed in order to break out of any ruts we may have been in. It could actually be really refreshing. Later in the evening, the Moon makes a trine to Neptune, that may see a desire to retreat into a reflective shell in order to reflect on certain happenings and get more in touch with the instincts.
Posted by The Curious Girl at 1:42 AM