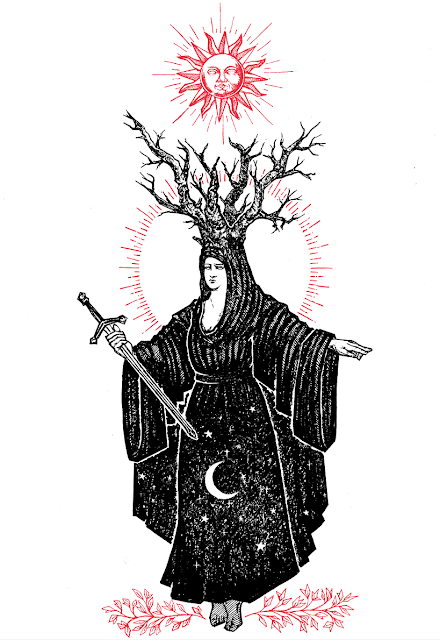 We begin this week with the Moon in detached, innovative, and rebellious Aquarius, making a trine to Juno in Libra, signifying a shared vision with likeminded weirdos. Minor lunar aspects to Mercury in Virgo and Venus in Cancer, as well as Chiron in Aries suggest kind of a crisis atmosphere that brings out compassion, understanding, and a desire to nurture, help, serve, and assist others through chaotic times. It also may translate to getting by with less, or having to make certain sacrifices for the time being. Everyone would be well advised not to forget to look after their own needs as well. In the afternoon, a lunar sextile to Mars in Aries can bring more self assurance, independence, and initiative. With the Pisces lunation tomorrow along with the Full Moon, we can see the possibility of something finally wrapping up and coming to a close. This can coincide with some nervous exhaustion, burn out, mentally and/or physically, so it’s a good idea to take extra care to be gentle with the mind and body, and find ways to nourish the soul, as this full Moon can see people running on fumes and in need of more rest, reflection, and tranquility than usual, as we adapt to the constantly shifting landscapes. Until then, the rest of today and this evening can see quite a lot of restless energy that seeks an outlet, physically, mentally, creatively, or all of the above. There’s an unconventional energy at play here that could require a lot of improvisation, and the Mars/Venus square, combined with the Mars square to Saturn and Pluto can be experienced as frustrating, invigorating, and revitalizing all at once, with the nervous system very stimulated.

Today see’s the Moon in reflective and sensitive Pisces, opposite the Sun in crisis prevention and detail oriented Virgo. This can see a mopping up period, where certain crises will (hopefully) begin to show signs of waning. The Full Moon occurs exact at 10:22 PM PST, and in it’s build up we see it make a sextile to Uranus in Taurus, and a semi square to Pluto, Saturn, and Mars, and a conjunction to Neptune. A trine to the Part Of Fortune can see some turns for the better in certain situations that may have had us a bit frayed around the edges, but it looks like being adaptable is the primary theme of this full Moon. There is certainly a lot of compassion and sensitivity in the air, but with the Virgo/Pisces axis being activated, this places an emphasis on rest, recovery, and crisis management. Again, hopefully what we are seeing here is a crisis period coming to a close and wrapping itself up, as full moons are about completions. I would highly advise everyone be gentle and forgiving with themselves and others under this Full Moon, as the lunar/solar opposition of Pisces and Virgo can be experienced as somewhat draining.

Today see’s the Moon in Pisces conjunct Neptune, opposite the Sun and Mercury in Virgo, sextile Jupiter and Pluto in Capricorn, and trine Venus in Cancer. In spite of the fact that there could be somewhat of a hustle and bustle with the Moon/Mercury opposition, and perhaps some indecisiveness or doubt around what to do, there are also some pleasant influences that indicate some positive, and generous trends that can see certain challenges on their way out or at least easing up considerably. The lunar sextile to Pluto and trine to Venus suggests some pretty powerful dynamics in the works, and things going on that can make quite a deep impression. There’s a lot of emotional power in these configurations, so take care that your emotions have a creative, and positive momentum. Late night in the final moments of the day see’s the Moon also sextile Saturn, which can add a feeling of added stability. The lunar opposition to Mercury can see a lot of nervous energy, busyness, and a need to check the details and make sure nothing is forgotten or overlooked, as this particular configuration can be prone to nervous exhaustion with a lot to assimilate and digest. Over all, this day shows some positive trends with a great deal of compassion, and emotional and spiritual generosity. Largeness of spirit.

This morning see’s the Moon in late Pisces, in opposition to Mercury in Virgo, trine Venus in Cancer, and for the first part of the morning, sextile Saturn Rx in Capricorn. This can indicate the possibility of a crisis situation coming to a close, bringing with it some feelings of comfort, safety, and security. The Moon enters the more assertive sign of Aries at 1:22 PM PST, to conjoin Chiron, while still holding a trine to Venus in late Cancer.  The Aries lunation can see a call to action, and the conjunction to Chiron can increase awareness of vulnerability and sensitivity, and can prompt an assessment of weak spots, while also generating a renewed enthusiasm for a fresh cycle with increased potentials and much broader horizons than before. Albeit, things will take hard work, discipline and focus, and the Mars/Saturn/Pluto squares will continue to hold influence over the remainder of the year, but as much as squares such as these are challenging, they also have the potential to produce significant breakthroughs and function as a catalyst. The lunar/Chiron conjunction can bring to light areas we may want to strengthen and consolidate over the course of the rest of the year. Mars stationing retrograde on Sep 9th will second this notion, as it won’t be in any other sign or occupy any other house in your personal chart for the remainder of 2020. Because it’s been in it’s shadow phase, from now until the duration of it’s time spent retrograde, Sep 9th, to Friday, Nov 13th, it’s a better time to form and reassess plans of action, and take inventory about what we want, our approach to getting it, and our desire nature in general. There can be a lot of introspection, second guessing, and reflection upon our impulses, which is a good thing. Acting in haste, impulsively, on a whim, won’t necessarily work out very well. It’s better to sit with any intense, pressurized instincts or desires a while longer, and form a workable, and realistic plan that won’t put us in a regrettable bind later. It’s a “look before you leap” transit, in the most simplified of terms, but can be used as a powerful catalyst.

Today see’s the Moon in Aries conjunct Chiron while squaring up to Jupiter. There can be a caring, compassionate energy to the day, perhaps a lot of big feelings that command attention. A lunar opposition to Juno in Libra suggests that others aren’t entirely on the same page as ourselves, and perhaps circumstances call for a certain amount of independence, or at least being able to draw a line between being caring and nurturing towards others, while also still properly looking after ourselves and our own needs. The Sun in Virgo trine both Jupiter in Capricorn and Uranus in Taurus has been placing the focus on being adaptable, innovative, broadminded, generous, and philosophical through crisis. Mercury is in the final and most urgent degree of “crisis management” Virgo today, and will enter into the more interpersonal, venusian realm of Libra tomorrow. This will shift thoughts, communications, exchanges, and short distance travels to a more relationship oriented theme. It’s much more pleasant to go somewhere because you want to, not because you have to, because of a crisis, health, or safety issue. Just as it’s much more pleasant to talk about things other than the latest crisis. With Mercury heading into a Venus ruled sign, this should lighten things up considerably, and there can be the opportunity for some pleasant and beneficial exchanges. Thank dog, because talking about the AQI has been getting really played out. I'm over it.

Today see’s the Moon in Aries conjunct Mars, square Venus in Cancer, as well as Jupiter, Saturn, and Pluto in Capricorn, while opposing Juno in Libra. Mercury enters Libra at 12:46 PM PST. This places the focus on interactions with others, and makes it’s entrance on a very intense wave of configurations. The Mars/Saturn/Pluto square can create some significant passionate energy, due to the blockages, challenges, and delays that Saturn creates. Today can be very action oriented and bursting with energy. There can be some impulsiveness, but Saturn can temper that with patience and resilience. There’s certainly an intensity to the day, and there can be a lot of power in our interactions with others, perhaps even some tensions, certainly some intense undercurrents. Over all, this looks like a pretty impactful and transformative day, with Venus in the final and most urgent degree of comfort seeking, emotionally sensitive, and security oriented Cancer, and Mercury just having moved into partnership oriented Libra, there can be a heightened emotional atmosphere that can feel somewhat climactic in nature. Venus in her final degree of the security oriented crab works to nail down a foundation for something so that she can move on to focus on more playful, creative, and passionate matters, in Leo, where she will harmonize well with Mars in Aries. In short, today is potentially very intense.

Venus moves into showy, creative and theatrical Leo at 12:22 AM PST, in the wee witching hours of Sunday morning. The Moon is in sensual and physical Taurus today, trine the Sun in Virgo, conjunct Uranus, square Venus, while still holding close contact with Mars in late Aries. The Moon later goes on to trine Jupiter in Capricorn, hinting that overall, this is an energy geared towards enjoyment, and it can be quite visceral, electrifying, or exciting somehow. Mercury in Libra sextile to Venus in Leo can hint at some really pleasant, and feel good exchanges. This looks like a pleasant Sunday overall, and there could be some unexpected turn of fortune for the better somehow, or a general feel good atmosphere of abundance, good will, and expansiveness. This looks set to kick next week off on a pretty magical, serendipitous, and powerful note.

Posted by The Curious Girl at 2:43 AM