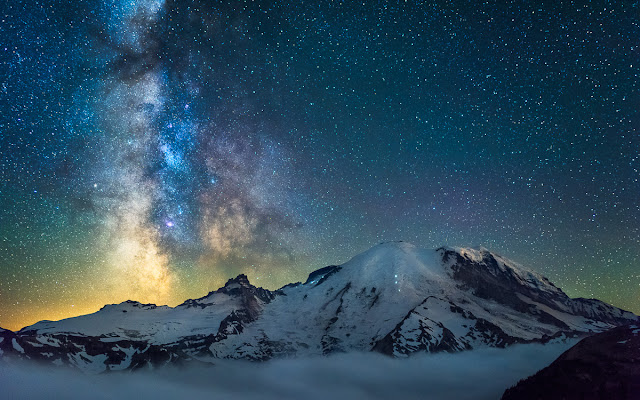 We begin the early morning part of Monday with the Moon still moving through the late degrees of moody, powerful, Scorpio, forming an emotional trine to Chiron (freshly in Aries) and Mercury and Neptune in Pisces, along with a sextile to Venus, and coming out of a direct opposition to Mars. This suggests deep contact, bonding, healing, transformation, compassion, reflection, and connection is available. Perhaps an attention to a rift that has occurred that would like to be mended, a longing, or a deep letting go/release. No matter what form it has taken, there was a deep and emotive focus that was highlighted over the tail end of the weekend. Emotional release, authenticity, feeling some deep emotions, and finding peace, sanctuary, and solace, amidst great change.

Venus forming a square to Uranus in the last degrees of Aries and a conjunction to Saturn and Pluto in Capricorn suggests that some profound revisions are underway in regards to complex psychological realities, or matters of power and control within certain connections. In some cases, a certain rebelliousness, spontaneity, or a break for freedom has reared it's head, and there is certainly a lot of action and change afoot. A need to assert a new vision and way of relating is present. A new foundation must be laid that assists us in releasing fears, suspicions, and in cultivating a lightness of being that is less encumbered by a need for control. 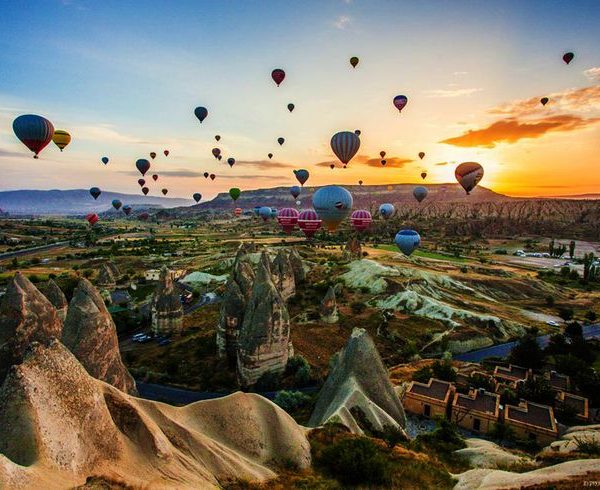 By 1:20 PM PST on Monday, the energy shifts considerably, towards a more optimistic, generous, and expansive persuasion, as the Moon enters broad minded, happy go lucky Sagittarius. This places the Moon in a square to the Sun and Neptune in Pisces, and inching closer to Jupiter in Sagittarius to eventually form a beautiful conjunction. This, along with Mercury in Pisces square to Jupiter suggests that ideals and expectations are highly inflated, and although the vibe can be one of hope and inspiration, and travel of the mind or body can be a part of the picture, it's important to stay grounded in reality and in what is truly humanly feasable. It can be easy to project our inflated ideals on to persons or situations or to place them on lofty pedestals from which they are bound to inevitably fall. The risk that we are then subject to disillusionment when people prove to be merely mortal is considerably greater.  Regardless of the above stated pitfalls, the hope and inspiration available within these configurations can be a wonderful motivating force for upliftment. 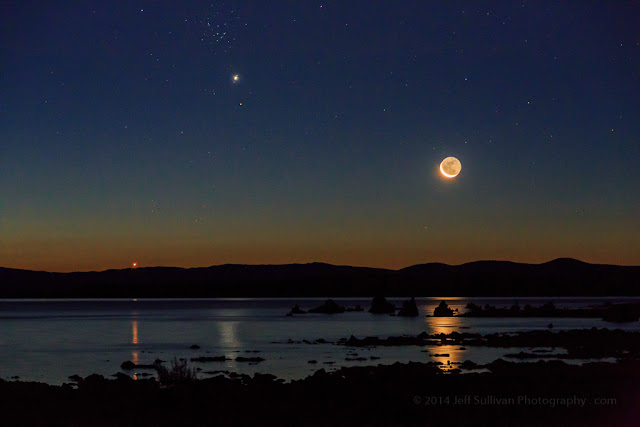 Tuesday see's the conjunction between the Moon and Jupiter begin it's process of perfection at 11:08 AM PST, becoming exact at approximately 5:11 AM PST on Wednesday morning in 21 degrees of Sagittarius. If you happen to be an early riser, keep your eyes peeled to the sky with your morning coffee or tea, to see this perfect conjunction between the Moon and Jupiter in the sky around 5:11 AM PST Wed. Conjunctions such as these are always a beautiful sight to behold.

Celestial aesthetics aside, there could be a boundless optimism or an expansion of horizons felt at this time, a feeling of new frontiers being traversed. Of course there is an underlying seriousness in the back round, surrounding the responsibility, sacrifice, and hard work it will all entail to keep such a hopeful ship afloat. A sense that new foundations are being laid for a more positive future however, will be difficult to ignore, and there could be a fresh feeling excitement around as the Moon forms a trine to Uranus.

Although, suffice to say, nothing worthwhile comes (or is kept) easily, so it will be important to keep our feet on the ground, and our expectations realistic.

With Venus traversing the final degrees of Capricorn this week, hand in hand with Pluto, square to Uranus, and sextile to Mercury in Pisces (which will station retrograde in March), deals are being struck, negotiations are being made, power couplings and/or power meetings are being had, and we are investigating the terms and the implications, with an open ended approach, but with very definite ideals in mind as to where we would like the chips to fall.
Venus' square to Uranus in Aries as she leaves Capricorn implies negotiating a revolution of terms, a fair amount of chaos, a sea change to the way things have been done before, and a need to break down stale, existing power structures, codes of conduct, or modes of interchange, to allow for new ways of doing things, -and new foundations, interpersonally, financially, and/or in regards to possessions, values, pleasure, and resources.

Overt displays of or abuses of power and control will no longer be acceptable, and there will be rebelliousness if a stuffy, inhibiting, power tripping or controlling atmosphere or dynamic continues to try and perpetuate itself ad libitum. 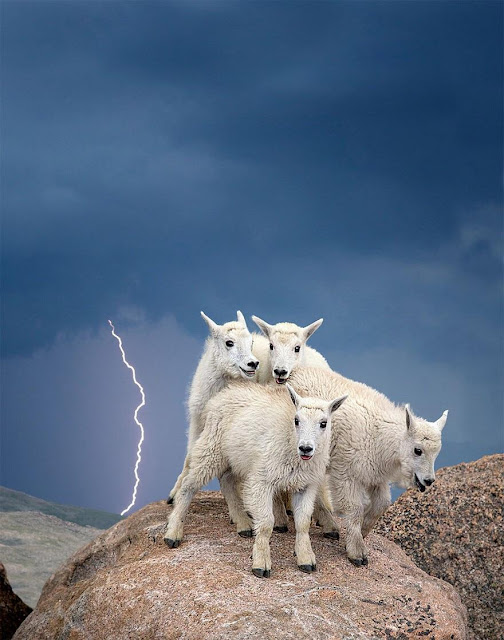 Wednesday, late evening at 10:48 PM PST, things take a decided turn for the serious, as the Moon enters  duty bound Capricorn. Here, Luna will sextile the Sun in Pisces, sync up with Mars in Taurus, while still trailing on a trine to Uranus, setting the stage for a new (and potentially greatly improved) reality. Interpersonally and perhaps even socially, this looks pretty good. There is a sense of having achieved a milestone of some sort, some long awaited goal, or a solid implementation of some much needed fresh approaches. It's as if an ideal is coming to be within our grasp at last. Of course, there is work involved, and we have to come back down to earth in order to maintain everything, and knuckle down to get the job done, but there is a certain unmistakable feeling of accomplishment, achievement, authority, "officialdom" and ambition surrounding things. Set in stone? Not quite yet... In the very least, we are certainly gaining some traction.

VENUS INTO AQUARIUS
On Friday, March 1st, at 8:48 AM PST, Venus finally begins to escape the clutches of Pluto, when she enters free thinking, detached, weird, humanitarian and cerebral Aquarius. This marks a time where a significant and beneficial shift has occurred within partnerships. Perhaps we have reached higher ground, and a calm, stable, relaxed, and self posessed maturity has taken root, where space, individuality, independence, and little personal quircks are no longer quite so threatening, and can perhaps even be viewed as an interpersonal (if rather bizarre) asset.
Venus here places interpersonal and social emphasis on a shared vision of the future, causes, individuality, space, unconventionality, intellectual rapport, friendships, groups, hopes, wishes, the future, humanitarianism, the collective, individuation, brotherhood/sisterhood, higher perspectives, and thinking outside the box. All things weird and unorthodox are in vogue when Venus travels through zany Aquarius.

Saturday, March 2, at 11:07 AM PST, the Moon enters futuristic Aquarius to perfectly conjoin Venus freshly in this detached and intellectual sign, suggesting a meeting of hearts and minds, and a fusion or agreement of sorts. A sextile to Mercury implies a satisfactory outcome and an agreement in good faith, even if there are still many unknowns, or underlying differences in values or approaches. A trine between Mars and Saturn shows a foundation has been laid, and with Venus in Aquarius conjoining the Moon, there is hope and inspiration about the future. 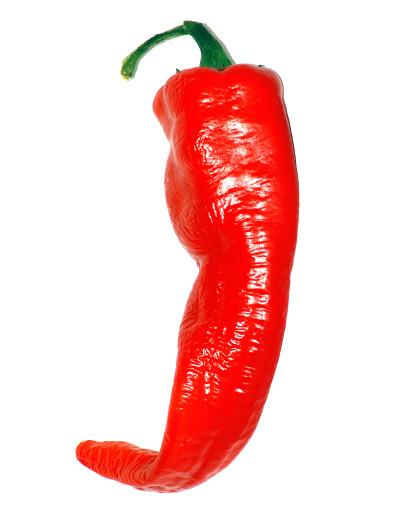 EXTRA SPICY
Saturday evening, around 7:46 PM PST, see's a more heated, spicy, rebellious, action oriented, exciting, (or perhaps argumentative) tone set in, as the Moon in Aquarius squares up to Mars in stubborn Taurus. Being that these are both fixed signs, there could be views, drives, and feelings with equal and opposite competing inertia. This aspect highlights some things to come, when Venus eventually perfects a square to Mars in Taurus through the coming weeks.
Sunday can highlight the necessity of independence, detachment, individuation, and higher perspective, and where this may conflict with our ideals around physicality, creature comforts, or our proclivities towards posessiveness (Mars in Taurus.) It can also simply be a mentally and emotionally stimulating, busy, exciting, (if chaotic and unsettling), action oriented day, with a lot of changes still afoot. Again, this brief lunar aspect will highlight potential challenges (or simply just excitement) to come, when Venus squares Mars. This definitely won't be a boring time.

Thanks for stopping by! I hope everyone has a wonderful week! I'll see you all next Monday. Stay tuned for the upcoming Mercury retrograde...
Posted by The Curious Girl at 10:12 PM