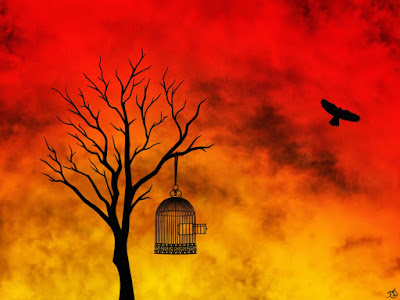 This week is highlighted by a gearing up towards some major shifts. With Mercury, Jupiter, and retrograde Venus all in their final degrees in Scorpio (but headed in seperate directions) we see a few shifts in emphasis in their prepatory stages, as some deep matters are dug up to the surface like bodies, brought to light, and reevaluated. The beginning of the week could see some deep feelings brought to the surface that are potentially uncomfortable, or in the very least, rather intense to navigate and sift through...It's a bit like performing an autopsy or exorcising ghosts.
Monday evening exacerbates the basic gist of this energy with a heavy opposition between the emo moon in Cancer and Pluto in Capricorn, emphasizing the potential for subtle (or not so subtle) power struggles and/or the need to pour over ghosts from the past...

The first major planetary shift we see occurs on Halloween eve. Tues see's Mercury shift out of intense and brooding #Scorpio, leaping into broadminded, freedom loving, optimistic, (yet often evangelical) #Sagittarius, prompting a more open dialogue where people more brazenly tell it like it is. This brings a more positive mental attitude that embraces differences a little more easily and philosophically, and stirs the passions for new ideas and directions. It also tends towards making people very forthright concerning their particular ideological stance.
This movement presages Jupiters eventual arrival into this same sign on Nov 8th, where the jovial gas giant will celebrate his birthday.
Later, the next day, Oct 31st, Venus backtracks into acquiescing Libra, though all is not sweetness and light on the prairie. This movement perfects and tightens her direct opposition to rebellious Uranus in Aries, steadily increasing a more independent streak within partnerships. Saying's such as "If you love someone, set them free. If they come back, they're yours, -if they don't, they never were, " and "you must love in such a way so that the other feels free," come to mind under these configurations.
The demands that people tend to make of one another in intimate relations are often unnecessary, and typically stem from mutual insecurity. When both parties are whole inside and secure within themselves, they are free to grow and develop as individuals, and have much more to offer one another, and to an intimate union between equals, where trust, mutual respect and intellectual affinity are able to flourish, as the pressure and demands of constantly affirming the others ego is removed and replaced with mutual admiration. This allows true love and respect to be cultivated. There could be changes and shocks to navigate this week between others and ourselves, but all is ultimately for the best.
Venus prepares to make eventual contact with Mars, suggesting some kind of positive compromise and meeting of minds and wills can and will happen, and any changes can turn out to be much more pleasant than previously anticipated. With the Sun moving into trine with Neptune, compassion and understanding will be available, even if it's not necessarily spoken aloud, but only felt. However, with Mercury in Sagittarius, preparing to retrograde the very same day Venus stations direct in Libra (Nov 16th), much is still being negotiated and brought to the discussion table for consideration, so the feminine wisdom of compassion, empathy, receptivity, and vulnerability could definitely serve us well in the interim when it comes to navigating these transformations to higher ground. Happy Halloween, and I hope you all have a wonderful week.
Posted by The Curious Girl at 9:05 AM