HOW I BECAME "THE DOGECOIN ASTROLOGER."

On Friday January 29th 2021, I created an astrology chart for Dogecoin, (just for fun, curiosity, personal entertainment, study fodder. As a joke, in true Doge fashion), using it's release date as a birthdate, and chart rectification methods to come up with an approximate birth time and coordinates.

My initial reason was actually curiosity, due to the fact that Dogecoin experienced a massive peak at the perfection of the Venus/Pluto conjunction in Capricorn. Venus being (money), and Pluto being (Power.) I felt like something was up, that there was more to the Dogecoin than met the eye for it to just peak out like crazy like that out of nowhere under that precise planetary perfection. The creators of the coin were associated with IBM. I felt it was worth looking deeper into, so I decided to create a chart and do some digging, study, and investigating.

I released the Dogecoin chart to instagram and Facebook that evening, complete with transit predictions. No one took it seriously, -except for my best friend Kurt, who proceeded to divest from other things and buy a fuck ton of dogecoins, and a lot of people tried to talk him out of it. I mean...A LOT. He also went on to post my social media posts/dogecoin predictions to reddit. It was all an odd thing to witness and be a part of, as I'm not in stonks or crypto at all, and don't know anything about investing or trading or cryptocurrency.

The week of February 1st 2021 was my "beta test" of the Dogecoin chart. I had to observe the accuracy of my predictions and see them come to fruition in order to affirm that my chart rectification was correct and to be confident that it could be relied upon in the future for further shitposts and dogecoin predictions. I needed to ensure that my dogecoin chart was in fact, seaworthy.

The dogecoin chart turned out to be accurate and reliable.

*It should be noted that Dogecoin is the only crypto chart I am willing to run predictions on and make publicly available for free because it's the only one that I find hilarious enough to cover without being paid for my time. I also share a Sun, rising, and Venus sign with Dogecoin, so I feel personally entertained by the idea of writing short horoscope predictions and analyses at random for a crypto currency that began solely as a joke, but clearly has a secret dream to be taken completely fucking seriously. I feel that we share a lot in common, and the other cryptos are just way too pretentious for me to want to run free charts on.

(No offense to anyone out there.)

Some argue that Dogecoin could never succeed, because it started out as just a joke. As a musician and creative person myself, all of my best music and works, (in fact, all of my music if I'm honest with myself), starts out as a joke, so I argue that this is precisely why dogecoin can be very success, and why people actually like it so much. It isn't taking itself overly seriously.

I don't know shit about crypto. Like I said, I'm just an astrologer.

Below is a timeline of my posts on dogecoin astrological predictions thus far to social media. I will continue to add relevant intel regarding this topic to this section/page as I feel compelled to and when I have time.

HOW IT BEGAN: A Timeline 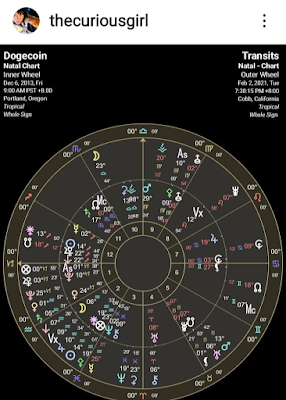 *The following text is copied and pasted from my IG post from Jan 29th 2021:

🐶💲 Dogecoin is a Sun sign Sagittarius, "born" Dec 6, 2013. It has natal Venus and Pluto in Capricorn, so it makes sense that the recent Venus/Pluto conjunction perfecting in Capricorn saw #Dogecoin surge with such fearsome and awesome power. Dogecoin is currently tanking again. If my estimations on time are anywhere near correct (just defaulted to 9 AM here), this makes Dogecoin a Capricorn rising, which feels very accurate to me, judging by it's surge of publicity and value under the Venus/Pluto conjunction. If so, we can perhaps expect Dogecoin to go back up again a little bit around Mon/tues/wed, after Venus enters it's 2nd house ruled by Aquarius, and the Moon runs through it's 10th house of public recognition. Again, this is an *estimated* "birth" time, I don't know the exact time, or coordinates that it was released, so this is a total crapshoot, for entertainment and observational purposes ONLY,- as the rising sign/house placements are one of the most important factors for predictive accuracy. This is based on some half-assed wikipedia research on Dogecoin, and *guessing*, based on the recent #astrological configurations. If anyone can offer a more approximate release/"birth" time for Dogecoin, this would be much appreciated. It'll be interesting to see what it does this week, if anything, other than continue to tank. Either way, this will give me something else to laugh about goddamnit let me live. Good luck nerds.😂✌️

On January 31st, I was still tentative, and in the beta testing stages of my dogecoin chart, awaiting for my predictions to come to pass. I posted the following to Facebook and IG.

*The text below the photo is copied and pasted from my IG post of the FB post screenshot.

Just tryna help y'all out. #Dogecoin #astrology #lolz. I also really want to stress that I am not a stonks or crympto expert or even novice, and even within my own area of expertise, my #dogechart still has to prove itself to me. I'll be more confident in my chart rectification (guessed on time and coordinates based on the recent Venus/Pluto conjunction which gave dogecoin a big respeck)-come Monday/Tues/Wed. But based on what I've assessed so far, I feel I can safely say that anyone with a decent stash of Dogecoins should not underestimate their doge, and perhaps even feel secure in entertaining a modest optimism in their doge. I've seen some despairing over all their doge and "what to do with all this worthless doge", and it's my hope that such folk will be in for a pleasant surprise come Monday/Tues/Wed. If so, then my dogechart is indeed seaworthy.🐶
End transcript.
It all came to pass, and by February 4th, 2021, my beta test of the dogecoin chart was complete. The dogecoin chart is seaworthy. She floats. The following picture, and text below it is from my IG post on February 4th 2021. 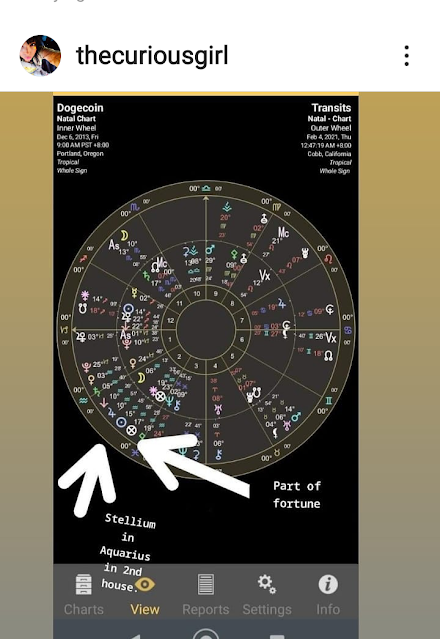 Very interesting. So what we have been witnessing currently with #dogecoin is corresponding to the transiting Part Of Fortune (one of the Arabic Parts) to dogecoins "natal" Part Of Fortune. This conjunction will perfect at exactly 1:14 AM PST at 23 degrizzles and the perfection ends at 1:20 AM PST. As you can see, Dogecoins 2nd house of money, value, assets and self worth is LIT by a stellium in #Aquarius. It will be interesting to see what transpires on /around Valentine's day, when #Mercury Rx perfects a conjunction with Jupiter at 13 degrizzles, while Jupiter and Venus are also tightly conjunct in Aquarius in Dogecoins 2nd house.
#Dogecoin #astrology #verymoney #suchmystic #wow
End transcript.

Given that the Dogecoin chart is seaworthy, as I write this it is currently February 7th 2021. The trajectory for Doge looks rather promising in the coming week or two. A trine between Mars, (currently running through Dogecoins 5th house of creativity, fun, and playful competition), and Pluto in Capricorn, transiting Dogecoins 1st house of self/identity, and conjunct Dogecoins natal Venus in Cap, will be giving Dogecoin quite the competitive edge, and dogecoin stands to develop quite a cult following, through sheer force of personality -and a very compelling charisma. With a powerful stellium in Aquarius running through Dogecoins 2nd house of money/self worth/value/earned income/natural, innate gifts and clout, it is clear that Dogecoin is on a serious fucking mission to get that bread.
It might be a good idea to get on the dogecoin bus before it reaches a dollar, because it looks like it's goal is to climb and establish itself as a serious form of (international) currency. (Natal Mars in 29 degrees of Virgo in the 9th house of travel/higher learning/international trade/people, places, and matters at a distance) trine natal Venus in Capricorn in the 1st house of self/identity.)
It also bears mentioning that with natal Jupiter in Cancer in the 7th house of partnership, Dogecoin will not be short of very generous offers for partnerships and collaborations, and can easily develop a very loyal, loving, do or die following that feel committed -and even emotionally compelled- to circulate the dogecoin and get it seriously established in the crypto community (Jupiter in Cancer in the 7th trine Saturn in Scorpio in the 11th house of social networking, social media.)
I will add that Dogecoin could come out of this Mercury retrograde with more clout than it had when it went into it with, and stepping on to a path of becoming seriously established.
Thanks for reading.
Check out my weekly astrology syndication to take advantage of a cosmic heads up to incoming influences, follow me on IG @ The Curious Girl, FB @ Amylia Willard,  and subscribe to my YouTube channel for tarot readings by sign, the link can be found in the DE-OCCULTED section of the website.
Best of luck, and get that bread fam.